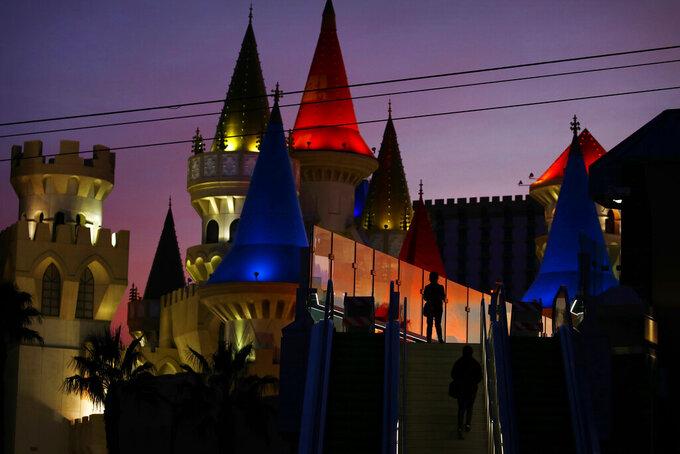 The Las Vegas Strip is devoid of the usual crowds as casinos and other business are shuttered due to the coronavirus outbreak, at sunset Tuesday, March 31, 2020, in Las Vegas. (AP Photo/John Locher)

LAS VEGAS (AP) — More than 71,400 people filed for unemployment in Nevada last week, according to data released Thursday by the U.S. Department of Labor, pushing the number of jobless claims since casinos and other businesses closed in mid-March due to the coronavirus past 164,000.

State officials and Gov. Steve Sisolak’s office did not immediately respond to messages about the second week of stunning numbers of people seeking benefits.

The governor on Wednesday conceded there are problems in the state jobless office, telling reporters it was adding people, expanding hours and "working around the clock non-stop" to handle the flood of unemployment applications.

He said most snags stem from people forgetting system passwords and because the state has done a poor job in the past of funding the jobless office, "Yes, you are going to get a busy signal (and) yes, you are going to have problems,” the governor said.

A statement last week from agency chief Tiffany Tyler-Garner promised that people having trouble submitting claims would not lose benefits regardless of when they are able to file. It said an online portal was set up for people having trouble resetting account usernames, passwords or both, and online claimants would receive instructions from state staff members.

A week ago, the Nevada Department of Employment, Training and Rehabilitation reported a record 93,036 people filed unemployment claims during the week ending March 21.

Sisolak on March 17 ordered casinos and other non-essential businesses such as bars, movie theaters and gyms to close to prevent people from congregating and spreading the virus. He reinforced the directive this week, extending the closure to at least April 30 and telling Nevadans to stay home if they aren't making essential trips for medical, grocery, pharmacy or other food purposes.

At least 36 people have died and nearly 1,500 have been diagnosed with COVID-19 in Nevada, according to state health officials.

Sisolak on Wednesday activated the Nevada National Guard for logistical planning and delivery of medical supplies as health officials prepared for an expected spike in patients with the respiratory illness.

Most people with the virus experience mild or moderate fever and coughing for two to three weeks. Some, especially older adults and people with existing health problems, can face severe illness including pneumonia and death.

— The Southern Nevada Health District in Las Vegas said an employee who had contact with clinic patients tested positive for COVID-19. The agency did not specify the worker’s job. It said symptoms began during the weekend and the person self-isolated at home. Investigators were contacting people who might have been exposed. The district employs about 500 people in clinical and environmental services including restaurant inspections.

— The Veterans Affairs Southern Nevada Healthcare System reported 11 employees tested positive for the virus. Nine were quarantined and were receiving treatment at home, and two were at unspecified hospitals. A spokesman said Thursday day-to-day operations have not been affected at the VA hospital in North Las Vegas and seven clinics in and around Las Vegas, Pahrump and Laughlin.