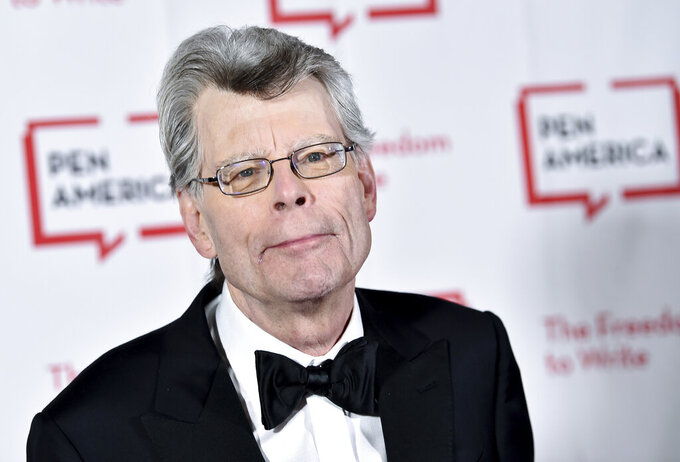 FILE - This May 22, 2018 file photo shows Stephen King at the 2018 PEN Literary Gala in New York. With independent bookstores shut down nationwide, a new online seller is offering help. In January, Andy Hunter launched Bookshop.org. Simon & Schuster is adding buy buttons for Bookshop.org to all of its websites and promoting Bookshop through emails and elsewhere online. It also has enlisted numerous authors, among them Stephen King, Susan Orlean and Jason Reynolds, to get the word out about Bookshop on social media and elsewhere. (Photo by Evan Agostini/Invision/AP, File)

Andy Hunter, founder of a new online sales outlet for independent booksellers, had seen a crisis building well before the coronavirus pandemic shut down many of the country's stores.

"Between 2015 and 2018, I saw this big jump in the percentage of weekly sales for physical books that were going to Amazon.com," Hunter says. “And it seemed like independent bookstores needed to do something to adapt, because the writing was on the wall.”

In January, Hunter launched Bookshop.org, which offers everything from the new Hilary Mantel novel to such classics as Boccaccio's “The Decameron,” and shares proceeds with independent stores. Hunter says weekly sales at first were around $30,000, but jumped to more than $450,000 by mid-March, as the virus spread and readers no longer could visit their favorite local stores.

On Tuesday, Simon & Schuster became the first of the major publishers to launch a formal partnership with Bookshop.org. Simon & Schuster is adding buy buttons for Bookshop.org to all of its websites and promoting Bookshop through emails and elsewhere online. It also has enlisted numerous authors, among them Stephen King, Susan Orlean and Jason Reynolds, to get the word out about Bookshop on social media and elsewhere.

“Independent bookstores are the lifeline of the intellect,” King said in a statement. "They have to remain strong, especially in difficult times like these."

“Indie booksellers have consistently served as bonding agents for our communities,” Reynolds said in a statement. "They work tirelessly to make sure we not only have books, but also a base, a place to come and simply be. They are, quite literally, the cover that protects the pages of who we are. And now, it’s time for us to protect them."

Hunter, who previously founded the digital publisher Electric Literature and helped create the online publication Literary Hub, sees Bookshop.org as serving a niche within a niche in independent selling. While stores such as Powell's Books in Portland, Oregon, and the Harvard Book Store in Cambridge, Massachusetts, have built effective presences online, many have lacked the resources and/or the desire to do the same.

Allison K Hill, CEO of the American Booksellers Association, the trade group for independent stores, says many have seen “unprecedented online sales lately.” She cautioned, “These sales don't make up for lost sales due to stores being closed,” but added, “We're also lucky to have Bookshop as part of the indie bookstore ecosystem, especially during this crisis."

Joelle Herr, owner of The Bookshop in Nashville, Tennessee, had been thinking for a while about investing in e-commerce, but was deterred by the logistics. Her store is just 550 square feet and she has limited space for more inventory. When she heard about Bookshop.org, its name comfortably close to her store's name, she did a “mental heel kick.”

"My storefront has been closed as of March 15, and, since then, I have been putting most of my energy into creating curated lists on our Bookshop.org page and trying to convince folks (via social media) to order their books (plus games and puzzles) from us to prepare for what looks to be a long stretch of staying at home ahead," she wrote in a recent email.

“Our customers have shown up for us in such a big way that it honestly makes my heart ache with appreciation — for them and for the Bookshop.org folks who created what has essentially turned out to be a lifeline during this terrible time.”

This story was first published on March 31, 2020. It was updated on April 2, 2020, to correct the name of the owner of a bookstore in Nashville, Tennessee. Her name is Joelle Herr, not Joelle Hill.