NHL All-Stars sad to miss Olympics, but happy to be in Vegas 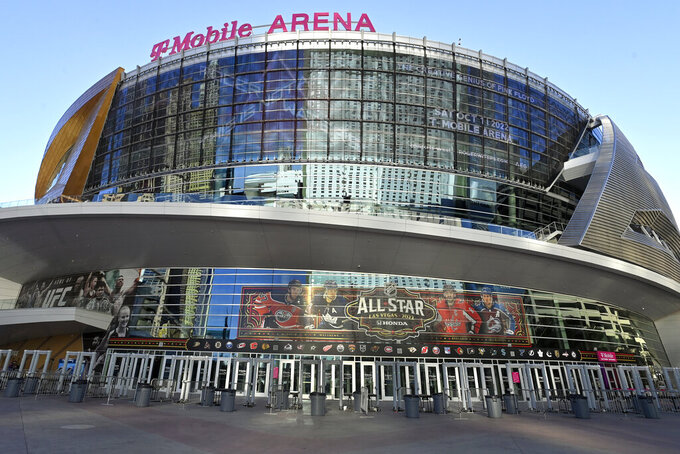 T-Mobile Arena stands in Las Vegas before an NHL hockey game between the Vegas Golden Knights and the Buffalo Sabres on Tuesday, Feb. 1, 2022, in Las Vegas. The arena is the site for this year's NHL All-Star game. (AP Photo/David Becker)

LAS VEGAS (AP) — Most of the world’s best hockey players are spending this weekend in opulent hotel suites in one of the planet's top party towns instead of being confined to modest Olympic accommodations in freezing-cold Beijing.

The NHL All-Stars still aren't happy about missing their chance to compete for gold medals, but nobody was complaining Friday morning about the consolation prize of a sunny weekend in Vegas.

“It's disappointing, because you realize you never know when you’re going to get an opportunity to go to the Olympics,” said Pittsburgh left wing Jake Guentzel, a probable member of the U.S. team. "It’s something you dream about, and it’s disappointing that it didn’t happen. But it’s not too bad to be in Vegas. This is a great spot to have it, and I know a lot of guys are excited.”

With the skills competition Friday night and the game Saturday, the NHL's top talents are set to light up the Strip in a city that has become a vital part of the hockey landscape in less than five years.

The league had to skip its All-Star festivities last year because of the coronavirus pandemic. They're back in full force this week at T-Mobile Arena, which will be packed with its usual menagerie of Nevada's rabid hockey fans.

But the All-Stars can't help feeling bittersweet about the weekend when they see footage of the Olympics on television, or when they see their countrymen at All-Star events.

“Yeah, it’s a disappointment,” said Nashville captain Roman Josi, who was headed to his second Olympics after playing for Switzerland in Sochi. “It was an amazing experience in 2014, and I think it’s something every athlete wants to do. I wish we could have found a way to play in the Olympics."

Josi will watch the Swiss team in Beijing from afar, although he isn’t sure how the time difference works. That’s one of the many reasons the NHL passed on on playing in an Asia-based Winter Games four years ago and was a factor again this year before the pandemic forced the league to pull out.

“That's something that a lot of guys were really looking forward to,” said Toronto star Auston Matthews, who would have made his first appearance for the U.S. team. “I know I definitely was. It's too bad. It's just the circumstance we're in. Hopefully we're able to get a best-on-best tournament at some point here, just because there's so many good young players, and the league is in such a good place right now with the amount of talent and skill that's in it.”

Matthews was alluding to the open secret that the league and the players' union are in discussions about bringing back the World Cup of Hockey in 2024, perhaps in February during the NHL season.

The last World Cup was held in 2016, with Canada winning it. Most of the world's best players haven't represented their countries since then.

The league and the players seem to be definitely committed to the 2026 Milano Cortina Olympics, but these All-Stars know the future is unpredictable. Not everybody here will be in the running four years from now, so their absence from Beijing stings despite the clear drawbacks.

“That was a huge opportunity for me,” said Tampa Bay goalie Andrey Vasilevskiy, who would have played for Russia. “I’ve played in the world championships, but it’s obviously not the same. Unfortunately we won’t be there, but I hope in four years we’ll be able to do that. It will be pretty cool to try it.”

Capitals star Alex Ovechkin will miss the weekend festivities after entering the NHL's COVID-19 protocols on Wednesday. The 12-time All-Star selection would have been the captain of the Metropolitan Division team, and he was likely to participate in the Hardest Shot competition Friday.

The hockey world already knows plenty about Las Vegas thanks to the immediate success of the expansion Golden Knights, but the weekend allows their town to do what it does best: Throw an expensive party.

“I never would have guessed there would be hockey in Vegas 10 years ago, and here we are,” Knights All-Star defenseman Alex Pietrangelo said. “The response we have around the city is awesome. They love having us here, and we love being here. People have been wanting to have this weekend in town for a while now.”

Vegas jumped the line last year to host All-Star weekend because the NHL wanted its players on the West Coast so they could fly to Beijing immediately after the game.

Dallas' 37-year-old Joe Pavelski is the oldest All-Star since Jaromir Jagr in 2016, while Minnesota's 34-year-old Cam Talbot is the sixth goalie to become a first-time All-Star at 34 or older (Johnny Bower did it at a record 36 in 1961).

With all 32 NHL teams required to have one representative on the All-Star rosters, nobody has more players in Vegas than the back-to-back champion Tampa Bay Lightning, who sent Vasilevskiy, Victor Hedman and Steven Stamkos.

“It's an opportunity to showcase our game in a great city,” Hedman said. “I know most of the guys here wanted to be playing in the Olympics, but it didn't happen, so we're happy to be here and show what our game is about.”

Vegas sports fans have an All-Star buffet this weekend: The NFL's Pro Bowl will be played at Allegiant Stadium on Sunday.