For Nodar: Georgian luge family makes a return to Olympics 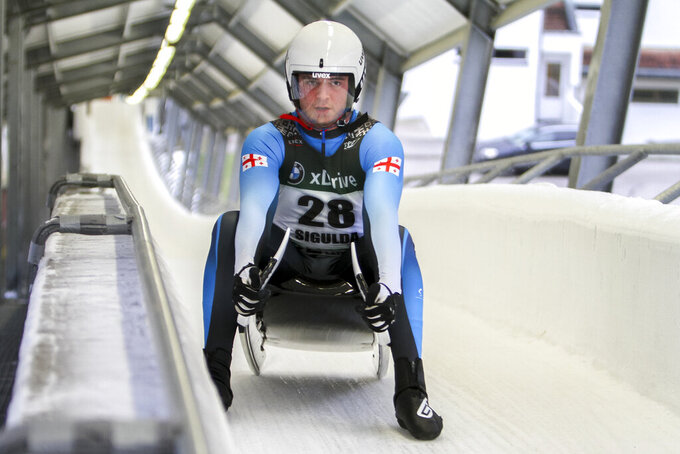 FILE - Saba Kumaritashvili of Georgia poses for a photo before speeding down the track during a men's race at the 52th FIL Luge European Championships in Sigulda, Latvia, Thursday, Jan. 7, 2021. Saba Kumaritashvili will compete in luge next month at the Beijing Olympics, 12 years after his cousin Nodar Kumaritashvili died in a training accident at the Vancouver Games. (AP Photo/Sandra Skutane, File)

Luge is Saba Kumaritashvili’s family business. His great-grandfather is credited with bringing the sport to their homeland, the former Soviet republic of Georgia, more than a half-century ago. His father runs the national federation, as his relatives have for decades.

At home, his family is synonymous with sliding.

At the Olympics, his family is synonymous with sadness.

He qualified for the Beijing Games with hopes of changing that.

It’s been 12 years since his cousin, Nodar Kumaritashvili, died in a training accident at the Vancouver Games, a death that still haunts the sport, especially so every four years when the Olympics roll around and the memories get rekindled. Nodar was 21 when he would have made his Olympic debut; Saba is 21 now, about to make his Olympic debut.

Put simply, Saba slides for his country. For his family. And for Nodar.

“Every generation of our family had at least one luge sportsman, and now my father and I are continuing this tradition and following Nodar’s footsteps,” Saba Kumaritashvili said in an interview with The Associated Press. “Thinking about him is painful but gives me strength as well.”

It is that strength that got him here, even while he knows that some in his family are nervous whenever he takes the ice because of what happened to his cousin.

Nodar Kumaritashvili was killed Feb. 12, 2010, after losing control of his sled during a training run just hours before the Vancouver Games officially opened. He would have raced the next day, becoming the first in his family to compete on sliding’s biggest stage.

His cousin now has that chance.

“I am happy and proud that I have opportunity to represent my family and country at these Olympics,” Saba Kumaritashvili said. “Now I feel responsibility to them, because they expect good results from me. It’s really big motivation, so I will try to do my best for them.”

That is what Nodar Kumaritashvili was trying to do 12 years ago.

The crash happened at 10:50 a.m. on a Friday, with most people already turning their attention to the opening ceremony taking place that night. The Whistler, Canada, track has 16 curves, and Nodar Kumaritashvili appeared to lose control around the 13th turn. His 176-pound body was no match for the gravitational forces, which sent him careening along the ice-covered walls of the track. The last impact with one of those walls knocked him off his sled and sent him flying across the track, his arms and legs flailing.

His body sailed over the wall of the track near the finish line, the back of his head striking a metal post outside of the track. Rescue workers got to him within seconds to no avail. He was pronounced dead after 59 minutes of resuscitation efforts, though a coroner’s report later revealed his head injuries were so traumatic that he died instantly.

His last recorded speed was 89.4 mph (143.9 kph), which almost certainly was the fastest of his career. Some of the world’s best sliders had said that week that the track was too fast and too dangerous; after Nodar Kumaritashvili’s death, Olympic officials made several changes, including having competitors begin from a lower spot on the track in an effort to reduce speeds.

“I won’t forget every detail of that day, that’s for sure,” said Erin Hamlin, a former women’s luge world champion who competed for the U.S. at the Vancouver Games. “And I don’t think any athlete who raced in Whistler will.”

German slider Felix Loch, who won the gold medal in men’s luge at those Olympics, went to Georgia two months later and tearfully presented the Kumaritashvili family with a gold medal of its own — because Nodar’s death, in Loch’s words, changed the sport. There have been other gifts: paintings, photos, books, even letters from some of the first responders who remain haunted that his life couldn’t be saved. His headstone in Georgia is adorned by a massive bronze sculpture of him on a sled, not far from where his actual sled and the damaged helmet he wore for his last ride are displayed.

Somehow, Saba was never deterred. The family, he decided, had unfinished Olympic business.

“I worked hard and believed in myself strongly,” he said. “Now I feel happy and satisfied that I’ve achieved one of my goals. ... I think every sportsman’s goal and dream is to be competing in the Olympic Games, so two years ago I decided to achieve this goal. And here I am.”

He is one of nine athletes from Georgia, and the only one from a sliding sport, to qualify for the Beijing Olympics.

That Saba Kumaritashvili could endure the family anguish and still follow his cousin’s path to an Olympics has drawn admiration from other sliders.

“He saw through the haze,” said former U.S. luge athlete and Olympian Christian Niccum, who competed in the 2010 games. “It was a terrible accident. An accident. These things happen in life and it’s awful, but we can either live in fear from it or learn from it, grow from it and keep going. That’s why I think he’s an excellent story.”

The family’s relationship with luge is believed to go back to at least the early 1970s when Aleko Kumaritashvili — “my great-grandfather laid the foundation for this sport,” Saba said — oversaw the building of a short training track. Soviet officials helped build a more complete track around 1973, and Aleko Kumaritashvili served as the country’s coach.

It has been part of the family makeup ever since. Saba and Nodar took similar paths to the Olympics; both were introduced to the sport by their family as kids, then got into international sliding and did enough to qualify for the Games despite not having World Cup circuit experience.

Saba insists he is ready.