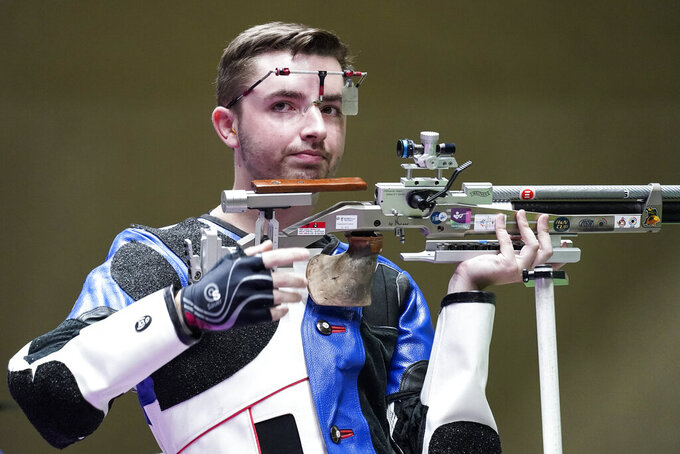 William Shaner, of the United States, reacts after winning the gold medal in the men's 10-meter air rifle at the Asaka Shooting Range in the 2020 Summer Olympics, Sunday, July 25, 2021, in Tokyo, Japan. (AP Photo/Alex Brandon)

TOKYO (AP) — Admit it: Hearing about air rifle at the Olympics conjures up images of athletes firing wooden-stocked, pump-action BB guns at ominous cowboys and targets that spin when hit.

The guns used in the air rifle events at the Tokyo Olympics are the most precise implements at the Games, elaborately designed hardware firing wadcutter pellets within millimeters of a target 10 meters away.

“Really, what they are is just air rifles that are a regular 1.77-caliber that shoot lead pellets with compressed air,” USA Shooting national rifle coach Dan Durben said. “It's just that everything else around it looks a lot fancier.”

Olympic air rifles were once standard issue, each one essentially the same down the line at the range. The issue back then was that while the rifles fit a certain shooter body type, everyone else had to adapt.

The rules were changed to level the playing field and shooters have since turned their rifles into erector sets, attaching risers, weights, extenders and apertures to the main components to shoot pellets with laser-like precision.

The rifles look like something a child slapped together while being left alone in his room for an hour, but each addition is designed to create a subtraction in the distance the pellets miss the center target.

The Olympics are filled with long distances, from the 26.2 miles of the marathon on down.

A millimeter in air rifle can mean the difference between gold and missing the podium.

Let's start from the back.

The butt plate looks like a spring-loaded robot's foot but fits the contour of the shooter's shoulder and can be moved back or forward for comfort.

Just above that sits the cheek rest, typically made of plastic or wood. It can be moved up or down, in or out, canted one way or the other to contour to the shooter's face. Some use 3D printers to precisely create and test out multiple cheek rests until they find one that feels right.

Rifle shooters can't conform grips to their hands like their pistol brethren, but they can move it back and forth or cant it in a certain direction for a better fit. The trigger also can be adjusted in multiple directions and even the blade angle can even be adjusted.

Some shooters will use a standard stock to hold and aim their guns, but others like to add an extension underneath, adding another metallic layer to the visual overload.

The black lever clamping down onto the rifle opens the chamber and pulls a charge of compressed air from the tube running below the barrel to burst the pellet toward the target at 170 meters per second.

The back sight looks like something from “The Terminator,” though it is only slightly fancier than a hunting rifle. It's more peephole than telescope and the knobs are the same ones hunters use to set the direction they want to shoot.

The front sight can be a little more elaborate, some with apertures that can adjust everything from the size of the white shooters see around the target to width of the lines forming the circles. They can even add color to fit the lighting on the shooting range.

“People are really good at recognizing concentric circles and the finger reacts to when everything is centered,” Durben said.

There are still more adjustments.

Risers can be added to both sights to make them appear to be on metal stilts. A metal sleeve is often fitted over the end of the barrel, extending the sight range, which in turn improves accuracy.

Many shooters like to add weights near the barrel tip. Others attach what are essentially car tire weights near the cheek. It's all about finding the right comfort and weight so the gun moves around less, keeping it on the target longer.

“There’s a lot of adjustability to these. That’s why they look so strange,” Durben said. “Ultimately, it’s still just an air rifle. Just a very precise one.”

And you pictured Red Ryder.