Olympic athletes urged by activists not to criticize China 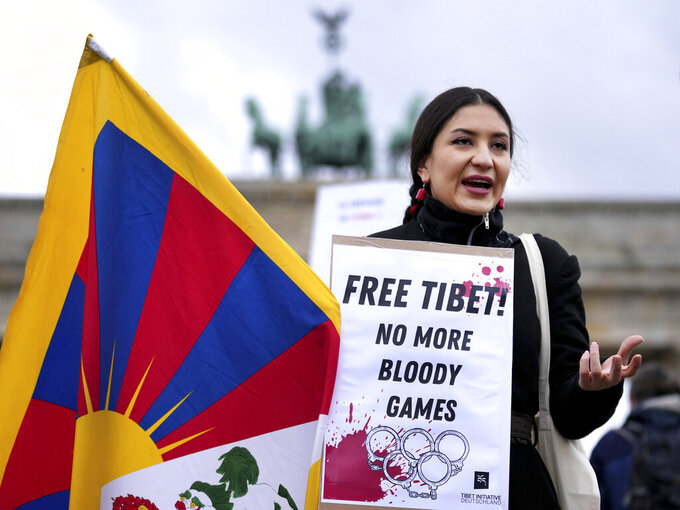 A person speaks while gathering with others in front of the Brandenburg Gate in Berlin, Germany, Tuesday, Jan. 4, 2022 for a protest ralley against the Olympic games in Bejing 2022. A coalition of human rights organizations is calling on German Foreign Minister Annalena Baerbock to diplomatically boycott the Winter Olympics in and around Beijing. The World Uyghur Congress (WUC), the Society for Threatened Peoples (GfbV), the Tibet Initiative Germany (TID), the Ilham Tohti Initiative and the Association of Hongkongers in Germany e.V. cordially invited for a protest march from the Brandenburg Gate to the Foreign Office. (AP Photo/Michael Sohn)

GENEVA (AP) — Athletes at the Beijing Olympics were urged by human rights activists Tuesday to avoid criticizing China because they could be prosecuted.

The International Olympic Committee has said athletes will have freedom of speech at next month's Winter Games when speaking to journalists or posting on social media. However, the Olympic Charter rule that prohibits political protests at medal ceremonies also requires “applicable public law” to be followed.

The IOC has not yet publicly committed to how athletes who speak out would be protected, activists said in a briefing hosted by Human Rights Watch.

“Silence is complicity and that’s why we have concerns,” said Rob Koehler, the director general of the Global Athlete group. “We know the human rights record and the allowance of freedom of expression in China, so there’s really not much protection.”

The IOC has not responded to requests in recent days to clarify how Chinese law could apply at the Beijing Games, which open on Feb. 4.

China’s treatment of its Muslim-majority Uyghur people and polices toward Tibet, Hong Kong and Taiwan have come under increased scrutiny ahead of the Olympics. China also drew criticism following the near-total disappearance from public view of tennis player Peng Shuai. She wrote in a social media post that she was sexually assaulted by a former senior member of the ruling Communist Party.

“That makes me upset and I am scared for their safety when they go to China,” Hoffman said. “They can speak out when they get back.”

Activists cited the cases of Peng, wrestler Navid Afkari, who was executed in Iran in 2020, and the treatment of athletes by the authoritarian regime in Belarus as examples where the IOC could have done more to protect athletes.

Amid concerns about data privacy and spying in China, some Olympic teams in Europe have also advised athletes not to take personal telephones and laptops to Beijing.

“Any person with a sane mind who hears all these things," Koehler said, "must have concerns.”