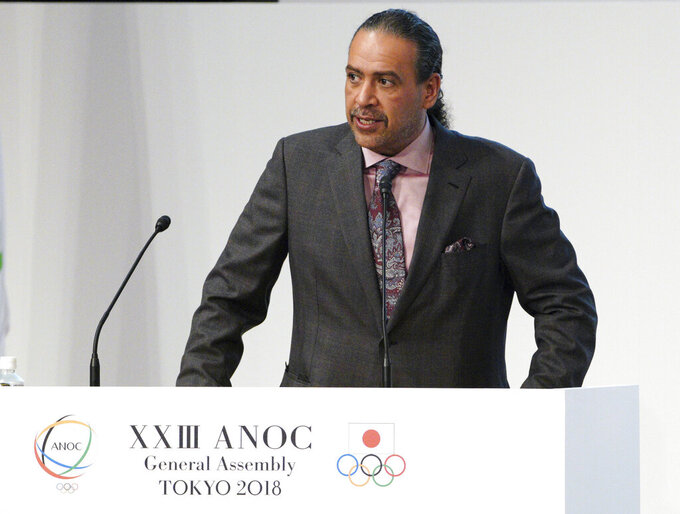 GENEVA (AP) — Olympic power broker Sheikh Ahmad al-Fahad al-Sabah was questioned in court for more than five hours Tuesday about his part in an alleged plot against political rivals in Kuwait.

Sheikh Ahmad and four others are on trial in Geneva on charges of forgery as part of an allegedly fake legal dispute staged to verify possibly manipulated video footage that claimed to reveal two politicians plotting a coup in Kuwait.

“I signed the documents presented by my lawyer,” the sheikh said in comments translated from Arabic about the 2014 commercial law dispute that prosecutors allege was faked and relied on a shell company in Delaware.

The indictment from November 2018 forced Sheikh Ahmad out of the public eye as an influential figure in Olympic and Asian soccer politics and prompted him to step aside as an IOC member.

A former Kuwaiti government minister, the sheikh had become known as a “kingmaker” in world sports for a series of election wins since 2012 for himself and allies, including International Olympic Committee president Thomas Bach.

The sheikh was the second of the five defendants to be questioned on day two of a trial scheduled to end Sept. 10. They face prison sentences of up to five years.

The other defendants are the sheikh’s English former lawyer in Geneva, a Kuwaiti aide and two other lawyers who worked in the upscale Swiss city.

Prosecutors allege the men took part in a fake legal dispute involving a Delaware company, Trekell Group, that they controlled.

The dispute was allegedly staged to verify possibly manipulated video footage as evidence of political and financial conspiracy. It was intended to implicate a former prime minister of Kuwait and a former speaker in its parliament.

Sheikh Ahmad denies all charges of forgery in the case that he has said was politically motivated against him. The investigation began in 2015 when a criminal complaint was filed in Geneva on behalf of Sheikh Nasser al-Sabah, Kuwait’s prime minister from 2006-11, and Jassim al-Kharafi, who has since died.

The al-Kharafi family’s lawyer, Catherine Hohl-Chirazi, repeatedly asked Sheikh Ahmad why an obscure company was chosen to analyze video footage of alleged treason instead of an international security firm.

Prosecutors allege Trekell was a shell company acquired by another defendant, aide Hamad al-Haroun, who made his chauffeur a signatory of the business.

Sheikh Ahmad said he trusted lawyers after 30 years as a president in sports and a political figure. Trekell, he said, was recommended by Matthew Parish, the Geneva-based lawyer who is being tried in his absence.

“I had full confidence in their competence,” the sheikh said, replying to Hohl-Chirazi at one point: “I won’t comment on your opinion.”

The allegedly sham 2014 arbitration ruling in Geneva was signed off by another of the Geneva-based defendants, Stoyan Baumeyer, then taken to the High Court in London to be recognized as a valid judgment.

Another High Court case was cited Tuesday by al-Haroun in a civil action he brought against Parish, Baumeyer and expert witnesses who examined the videos seven years ago.

Under questioning Tuesday, al-Haroun said a judge in London found in June that Parish and Baumeyer had not colluded and that the expert witnesses verified the videos in good faith.