Olympics on tight timeline to chart new path on protest 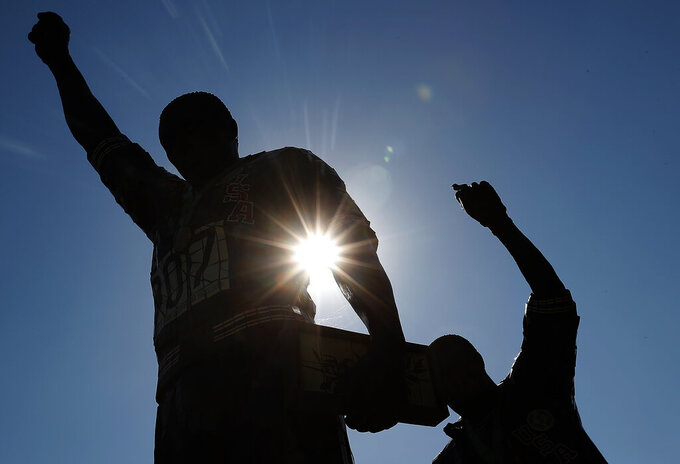 FILE - In this Oct. 17, 2018, file photo, a statue in honor of former Olympians Tommie Smith, left, and John Carlos is seen on the campus of San Jose State University in San Jose, Calif. The U.S. Olympic and Paralympic Committee heeded calls from American athletes, announcing Thursday, Dec. 10, 2020, that it won’t sanction them for raising their fists or kneeling on the medals stand at next year’s Tokyo Games and beyond. It was Rule 50, which prohibits inside-the-lines protests at the games, that most famously led to the ouster of Smith and Carlos from the 1968 Olympics in Mexico City after the sprinters raised their fists on the medals stand to protest racial inequality in the United States. (AP Photo/Tony Avelar, File) 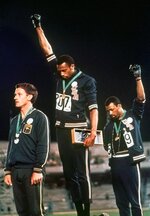 For generations, the IOC knew exactly where to look for key support of its ban against protests at the Olympics.

In 1968, it was the U.S. Olympic Committee that sent home its own athletes, Tommie Smith and John Carlos, when they raised their fists while on the medals stand at the Mexico City Games.

In 2019, it was the same organization that placed its own athlete, Gwen Berry, on probation for doing the same after her win at the Pan-Am Games.

This week, the American federation put the IOC on notice: It is no longer the IOC's partner when it comes to enforcing the contentious Rule 50. The USOPC is now heeding the calls from many of its own athletes and will no longer punish them for kneeling or raising fists or any other kind of acceptable demonstration at the Olympics.

But there are details to iron out, and they strike to the heart of how much change is truly possible between now and next July, when the Tokyo Olympics are scheduled to take place.

High on the list: What can athletes demonstrate about, and what will an acceptable demonstration look like?

“That becomes a difficult situation,” said Harry Edwards, the activist who helped brainstorm the gestures by Smith and Carlos 52 years ago. “Because you could very easily get into a thing of trying to outdo someone else and it ends up having nothing to do with the spirit of the issue.”

That confusion helps explain the calculated response to the USOPC that came from the IOC in the form of a short release from the head of its athlete commission, swimmer Kirsty Coventry of Zimbabwe.

Well aware that the protest rule can’t stay as-is for the foreseeable future, Coventry and the IOC are in the process of surveying athletes across the globe for their thoughts about possible changes. She said the majority of the respondents believe in the right of free speech, which is “respected” at the Olympic Games (but only in certain settings) and “express support for preserving the ceremonies, the podium and the field of play.”

Though Coventry’s committee is still accepting feedback, and won’t make any final decisions until early next year, she’s previewing a far less radical adjustment to Rule 50 than the U.S. contingent would like.

American athletes have been reeling from a summer of unrest over police violence against Black people in the United States. Every major sports league has agreed to change policies to give their players a bigger platform to discuss race and social injustice.

But U.S. sports leagues and the Olympics are very different creatures. The Olympics are a behemoth that counts America as only one of 206 countries who are members.

Some of the biggest members are among the IOC's most important partners — China, for instance, hosted the 2008 Olympics and will do so again in 2022 — and they don't share the same concerns or values about free speech or racial injustice as do the United States and many of its closest allies.

“Many have also recognized the practical question of how to choose between the opinions of hundreds of issues from different angles across the world,” Coventry said of her survey respondents. “We can see that it would be very difficult to make such a judgment without dividing the athlete community across all 206 NOCs.”

Moushaumi Robinson, who led the U.S. athletes group that pressed for the changes, said she understands the complexities. Her group continues to discuss them to try to come up with solutions.

All of which leads Edwards to believe that Thursday's move by the USOPC and its athletes is a sign of progress — not necessarily a huge leap but another step.

“This is an ongoing struggle, and it's going to continue to be a struggle," he said. “And what today reflects is that this generation of athletes is more than willing to do their part.”