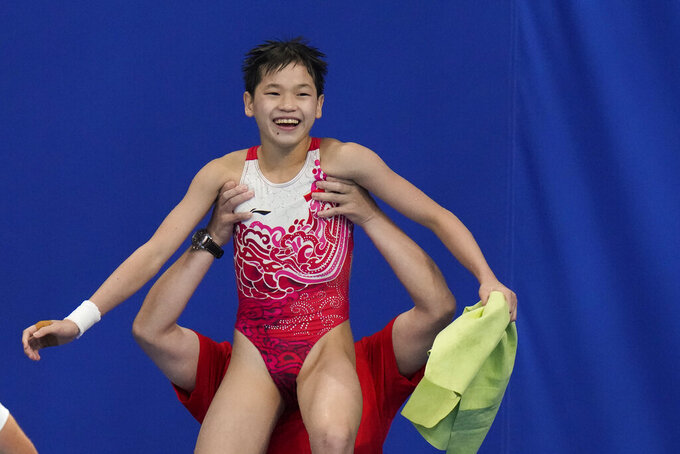 And in some ways, it was.

China’s divers are programmed from an early age to strive for perfection. The 14-year-old Quan Hongchan delivered it with two of her five dives in a dominant performance to claim the gold medal in women’s 10-meter platform at the Tokyo Olympics on Thursday.

All seven judges gave Quan perfect 10s for her second and fourth dives in the five-round competition.

Quan dedicated her victory to her mother, who is ill.

“I want to make enough money to support her,” Quan said through an interpreter. "I listen to my coach very carefully and follow his instructions very carefully.”

With IOC President Thomas Bach watching at the Tokyo Aquatics Center, Quan ended with 466.20 points to win by a massive margin. Her Chinese teammate Chen Yuxi claimed the silver medal with 425.40 points.

The 15-year-old Chen won the 10-meter platform title at the 2019 world championships and also took gold at these Games in the 10-meter synchro with teammate Zhang Jiaqi. But Quan — the youngest member of China’s Olympic team in Tokyo — is performing at another level.

Chen acknowledged that Quan already is ahead of where she was when she was Quan’s age.

“We don’t really have a lot of great training techniques," Chen said. “It’s more a matter of dive after dive and practice makes perfect.”

It marked the fourth consecutive Olympics in which China has won every single women’s diving event.

Quan became the second-youngest Chinese gold medalist in the event at the Olympics after Fu Mingxia won it in 1992 at age 13.

Perfectly serious during the event, Quan was full of giggles afterward while talking to reporters. Barely tall enough to be seen behind a microphone, Quan said she'd celebrate by eating latiao, a spicy Chinese snack.

Asked what she likes doing besides diving, Chen said she enjoys math.

“At the moment we don’t have regular schools to go to,” Chen said. "We have classes by various tutors.”

Melissa Wu of Australia won the bronze with 371.40 points for the second medal of her Olympic career.

The 29-year-old Wu, who was competing at her fourth Olympics, won a silver in 10-meter synchro at the 2008 Beijing Games with Briony Cole.

Wu, who describes herself as “half-Chinese,” started crying when she began talking about her Chinese grandmother, who died recently.

“I wanted her to see me win this medal,” Wu said.

Wu contemplated quitting when her sister died in 2014.

“That was a huge challenge for me to overcome,” she said. “Diving kind of saved me and gave me something to focus on after that.”

The only diving event that China has not won at the Tokyo Olympics came in the men’s 10-meter synchro, which was won by Tom Daley and Matty Lee of Britain.

The men’s 10-meter platform will conclude the diving program Friday and Saturday.