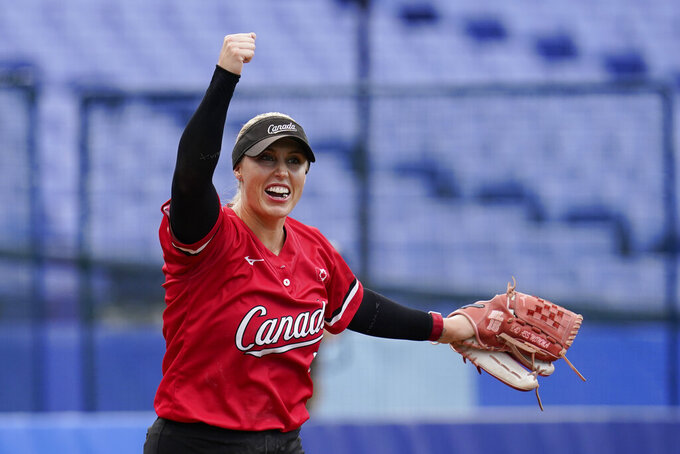 YOKOHAMA, Japan (AP) — As much as losing to Japan stung American softball players, the International Olympic Committee's decision to drop the sport again for 2024 angered them even more.

“I think that it's a shame that softball's not on the Olympic stage," U.S. pitcher Monica Abbott said after Tuesday night's 2-0 loss, "and I challenge the IOC to instate softball as a women’s sport into the Olympic docket on a regular basis.

“It’s been proven that we attract viewers, we’re active on social media. It’s a worldwide sport. It’s played really well in multiple continents and areas of the world,” she said. "And I think it’s really difficult when you’re in an Olympics and then you're out of an Olympics, you’re in one and you’re out of one, to continue to build that momentum and engagement for this sport to grow worldwide.”

Perhaps it is time for them to turn to the courts, much like the women on the U.S. national soccer team have done in their effort to secure equal pay from the U.S. Soccer Federation, which has been unsuccessful thus far.

“Following discussions with 19 IOC-recognised international federations, Paris 2024 submitted its proposal to include breaking, sport climbing, skateboarding and surfing on the Olympic program to the IOC,” the IOC said in a statement. "This proposal was then discussed and fully supported by the IOC’s Olympic program commission, further strongly endorsed by the IOC executive board and put forward to the IOC session, who approved it in June 2019. After the vote by the IOC session in June 2019, no further sports could be put forward for inclusion on the sports program of the Olympic Games Paris 2024."

“I think they made a pretty good decision this time,” Canada second baseman Kelsey Harshman said. “This sport is so special to so many people, and there’s so many amazing women that were here this week, and so many other amazing women who weren’t here this week who play this sport.”

“As a young kid growing up who used to watch these teams," she said, "it was such an honor and a privilege to be able to be out here, put on this uniform and play the sport that we all love. And I hope that we were able to show a little glimpse of that to the world, and especially to the IOC, and I hope that they can take that into account of how many eyes are watching.”

Softball players have hope the sport will be brought back for Los Angeles in 2028 and Brisbane in 2032.

For many of them, their next competition will be the lower profile Athletes Unlimited, which starts its second softball season on Aug. 28 at Rosemont, Illinois. Abbott has pitched since 2010 for Toyota Motor Company in the Japan Softball League.

“I think if this game showed anything, it showed exactly what we’ve been preaching all along: that it is a global sport, that it is competitive in other places other than just the United States and Japan," U.S. pitcher Cat Osterman said. "Hopefully the IOC can take note because this is also a sport that allows a lot of different female athletes to be successful. You don’t just have to be fast. You don’t just have to be strong. You can be a very different type of athlete and be successful on this stage, and that gives younger female athletes a dream when you have the Olympic dream alive.”

"When you look at equity, there’s certainly not as many female athletes at an Olympic Games as there are men’s,” Smith said. “From my perspective, it was absurd that it was ever taken out. I think it’s more than made its case for why it should be in. I believe that had COVID not existed, you would have had packed stadiums to watch this game played. And I don’t know how it’s possible that women’s softball shouldn’t be returned to the Olympic platform and become a core sport because it’s more than proven its value.”

Softball, like baseball, has a problem with vanishing offense, with pitchers often overpowering hitters with 70 mph velocity from a rubber 43 feet from home plate.

Japan coach Reika Utsugi said that without the Olympics, more effort will be needed to attract athletes to softball in her nation.

“We hope that it will make a comeback sometime in the future,” she said through an interpreter. “In order to make that happen, I think we want to make sure that we nurture athletes who will be able to play well in those games when and if that happens.”

Osterman said the impact of the IOC's decision is cruel.

“Every time you do that, there’s younger and younger girls whose dreams get killed,” she said. ”There's other sports that aren't as competitive and other countries around the table that are not voted out."