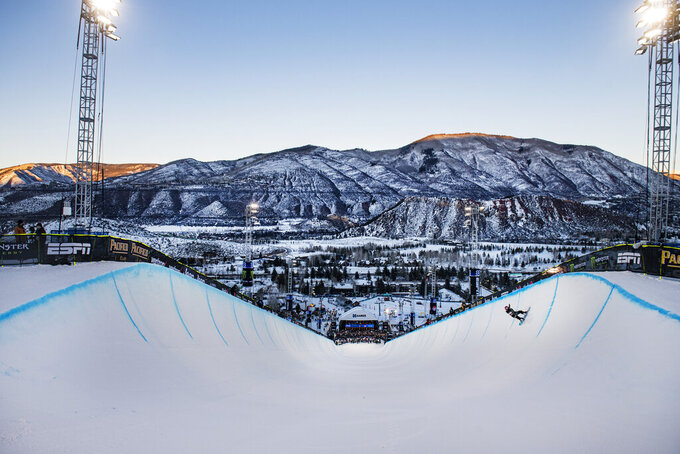 ZHANGJIAKOU, China (AP) — Spanish snowboarder Queralt Castellet goes by “Q" for one good reason: “She demands the respect of one big letter," her coach cracked.

OK, maybe two reasons — the primary being that it saves everyone the effort of trying to pronounce her name. FYI: It's Kuh-ralt.

Without a doubt, “Q” has become an answer to this trivia question: Name a rider who could give defending Olympic halfpipe champion Chloe Kim a run for the title at the Beijing Games.

At 32 and competing in her fifth Olympics, Castellet shows no signs of slowing down. Instead, with the assistance of her coach, two-time Olympic silver medalist Danny Kass, she is flying higher than she did in her 20s and consistently landing more gnarly tricks. On top of that, she can't recall having this much fun.

“The day I stop learning is probably when I really stop competing,” Castellet said in an interview during last month's Winter X Games, where she placed second in a field that was missing Kim. “But I’m on a very good path with a lot of progression. I’m having a blast.

She is feeding off the energy of this younger generation. She looks around and sees almost nobody who was there at her first Olympic appearance in 2006.

Back then, Castellet was a wide-eyed teenager from Spain — never mistaken for a haven of snowboarding — going against an American force that included Hannah Teter, Gretchen Bleiler and Kelly Clark. Now, it’s Kim and Maddie Mastro, along with a host of international riders such as Xuetong Cai of China.

“To me, it’s an honor to be able to share this time with all different kinds of ages of riders and different styles,” said Castellet, who has halfpipe qualifying on Wednesday. “And to see what has happened to snowboarding because of all the different flavors that they bring in. It’s just amazing.”

Somewhere, maybe in her parents' house, there’s video of a 16-year-old Castellet competing at the 2006 Turin Games. She hasn't watched the halfpipe run in quite some time.

She does recall this from her 26th-place finish: sheer enjoyment. She had so much passion, so much determination.

Still does after all these years.

Her best Olympic result was seventh at the 2018 Pyeongchang Games. But she’s a different sort of rider these days.

For that, she credits Kass, with whom she began collaborating about two seasons ago.

In Castellet, Kass saw a snowboarder who had as many tricks at her disposal as Kim. He watched Castellet for a while, learned what she could do — and do well — in the pipe and then went about honing in on her strengths. For instance, they've dialed up her cab jump — riding “switch” (the opposite direction from normal) and jumping frontside — along with adding degrees of spin.

This keeps her youthful, too: riding with the kids at Ski & Snowboard Club Vail, where Kass works with the team.

“I think that made her have a little bit more fun ... actually riding with junior peers, young kids she’s not competing against,” Kass explained. “She was trying new tricks and what they were learning.”

In Kass, Castellet found a fresh voice from a snowboarder she grew up watching and admiring. Kass captured two Olympic silvers, including in 2006 when he finished behind Shaun White, who is trying to defend his title again this winter.

Castellet also took to heart one of Kass' biggest pieces of advice: Just have fun.

“Not that I forgot (to have fun), but I could get a little too serious or a little too repetitive in some things,” said Castellet, whose country has won only one gold medal at the Winter Games, in 1972, by ski racer Francisco Fernández Ochoa. “It’s very, very important to enjoy everything on the mountain, and this side of me is just really, really blooming.”

Over the years, she's become a student of the sport. Castellet frequently watches video of other riders to pick up tips and draw inspiration. She may view a run of Australian rider Scotty James to study how he rides “switch." Or scrutinize the Japanese team to see how it tackles a difficult trick. Or examine the style of Danny Davis. Or even watch one of her biggest rivals, Kim, to see what she does so well (conclusion: “She goes for it — always,” Castellet said. “Just brings this energy.”).

“It’s cool to be surrounded by such amazing riders," added Castellet, who was second behind Kim at the Dew Tour in December in Copper Mountain, Colorado. “I can not only get motivated, but also learn from them.”

As for how long she may keep competing, “Q” doesn't have an exact “A” for that one. Not yet anyway.

“I can’t tell you what I’m going to be doing tomorrow, for example, but I definitely know that there’s snowboarding,” Castellet said. “I like progressing. I like the experiences. I’m having more and more fun every time, just because I learn every day.”