Rafael Nadal to make return to competition with debut in DC 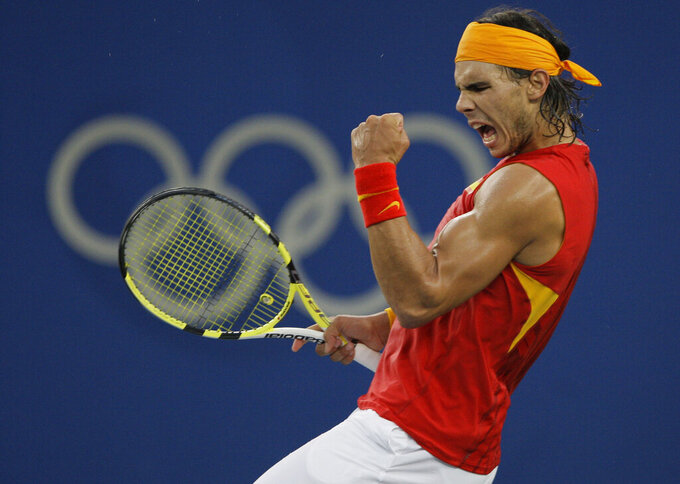 FILE - Rafael Nadal of Spain reacts to winning a point against Fernando Gonzalez of Chile during their Gold medal singles tennis match at the Beijing 2008 Olympics in Beijing, in this Sunday, Aug. 17, 2008, file photo. Nadal will not be participating in the Tokyo Games. (AP Photo/Elise Amendola, File)

WASHINGTON (AP) — Rafael Nadal will return to competition by making his debut at the hard-court tournament in Washington.

The Citi Open announced Thursday that the 20-time Grand Slam champion is in the field for the July 31 to Aug. 8 event that serves as a U.S. Open tuneup.

Nadal has not played since his loss to Novak Djokovic in the semifinals of the French Open last month.

The 35-year-old Spaniard decided to sit out Wimbledon, which ends Sunday, and the Tokyo Olympics, which open July 23, saying his body needed time to rest and recover after the clay-court season.

Others on the list of players entered in the Citi Open include Wimbledon semifinalists Denis Shapovalov and Hubert Hurkacz, who beat Roger Federer on Wednesday.

The tournament says Rock Creek Park Tennis Center will be allowed to have spectators at 50% of capacity. Last year's Citi Open was canceled because of the pandemic.