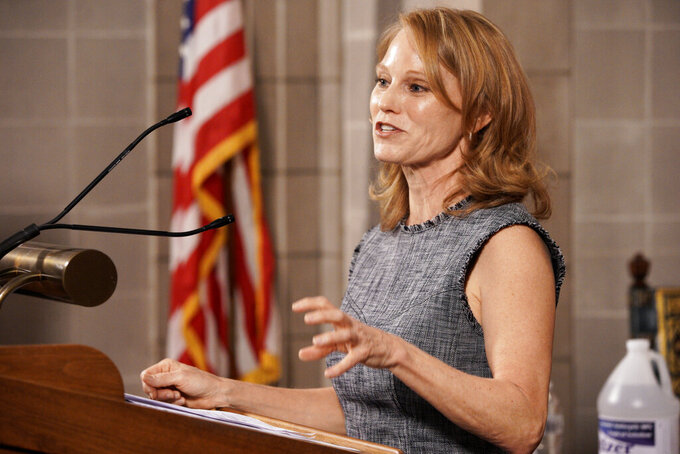 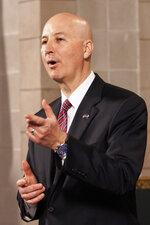 LINCOLN, Neb. (AP) — Gov. Pete Ricketts on Thursday defended his refusal to issue a stay-at-home order for residents, arguing that it isn't necessary for Nebraska even though 40 other governors have done so to try to keep the new coronavirus from spreading.

Ricketts said he doesn't plan to deviate from his current approach, which includes a statewide, non-enforceable recommendation that residents avoid gatherings with more than 10 people.

The governor has taken a regional approach as well, ordering bans on 10-person gatherings and forcing restaurants to close their dining rooms in areas where confirmed cases of the virus can't be traced. Those bans are now in place in 56 of Nebraska's 93 counties, accounting for well over two-thirds of the state's population and virtually all of its population centers.

At his weekday news briefing, Ricketts pushed back against arguments that Nebraska should join 40 other states with official shelter-in-place orders, saying it doesn't make sense to compare states with different needs and populations.

“These things aren't all apples to apples,” he said.

Ricketts said some of Nebraska's rules are stricter than other states that have full shelter-in-place orders. He pointed to Florida's statewide order, announced Wednesday, which exempts religious services. Nebraska's 10-person limit doesn't include any such exemption, he said.

Ricketts, a former executive at TD Ameritrade, said forcing businesses to shutter when they can still safely operate won't necessarily keep the virus from spreading, particularly if companies are able to keep their workers separated. He said he expects confirmed cases to increase over the next several weeks as more people are tested, but he doesn't anticipate the same sharp jumps as other states.

He also argued that Nebraska has had more time to prepare because the virus was likely spreading in hard-hit states like Washington and New York long before officials realized it. Nebraska officials approved their plan in early March, before officials found the first case of the virus that couldn't be traced to an outside source.

Ricketts said the plan was developed with experts at the University of Nebraska Medical Center, one of three national biocontainment units that have cared for American citizens infected with Ebola and one of the national locations where cruise ship passengers were treated for COVID-19, the disease caused by the coronavirus.

“Our plan is right for Nebraska,” he said.

His comments came as the U.S. Department of Labor reported another record-setting surge in the number of unemployment claims filed in Nebraska and nationally. More than 40,000 people in Nebraska have filed claims in the last two weeks as businesses have closed and laid off workers.

Nebraska Labor Commissioner John Albin said his office has received calls from businesses that workers are threatening to quit because they can get better pay under the expanded unemployment benefits signed by President Donald Trump. Albin said many workers mistakenly believe they can qualify for benefits if they quit, which isn't true.

Meanwhile, Ricketts ordered Nebraska schools to remain closed to students through May 31 as officials reported that the state's COVID-19 death toll has risen to five.

Students have been taking their lessons at home via online classes since schools began closing last month as the coronavirus pandemic spread through Nebraska. Ricketts' order, issued Wednesday, ensures the children won't be returning this school year to the close quarters of their classrooms.