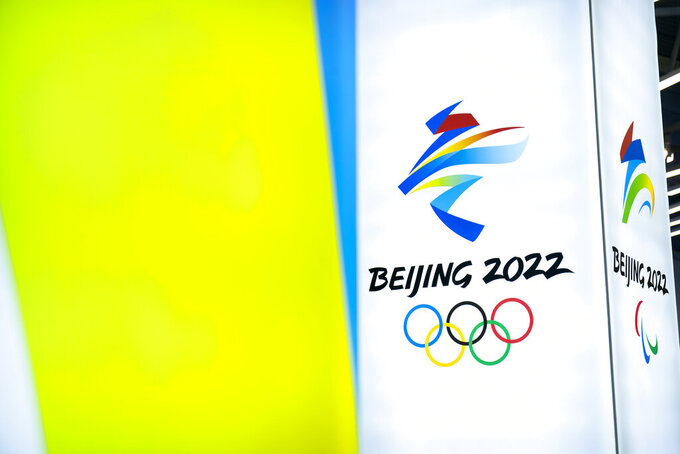 The logos for the 2022 Beijing Winter Olympics and Paralympics are seen at an exhibit at a visitors center at the Winter Olympic venues in Yanqing on the outskirts of Beijing, Friday, Feb. 5, 2021. A small core of international lawyers and activists are prodding leading Olympic sponsors to acknowledge China's widely reported human-rights abuses against Muslim Uyghurs, Tibetans and other minorities. (AP Photo/Mark Schiefelbein)

GENEVA (AP) — Activists protesting the 2022 Beijing Olympics hoped China’s record on human rights would get on the agenda this week at a major IOC gathering.

The International Olympic Committee was just as determined not to speak publicly of the “No Beijing 2022” campaign’s concerns.

Words like Uyghur detention camps, Tibet, and Hong Kong, and certainly not genocide, were unspoken by Olympic officials across three days of debate broadcast online, and three news conferences that wrapped on Friday.

Pressed on if the Olympic movement had dismissed the activists’ causes, newly re-elected IOC president Thomas Bach stressed the limits of its political role.

“We are not a super-world government where the IOC could solve or even address issues for which not the UN security council, no G7, no G20 has solutions,” Bach said at a news conference on Friday.

This insistence on political neutrality has frustrated campaigners uniting around Olympics they have branded “Genocide Games” for the treatment of China’s Muslim minority Uyghur people in the western Xinjiang region.

They recalled on Friday their meeting with senior Olympic management last October that took five years to secure.

“They repeatedly told us that the IOC’s mission was to create a better world” without discrimination, said Zumretay Arkin, an advocate with the Germany-based World Uyghur Congress.

“A better world to us means a free and democratic world where there are no camps, no forced labor factories, no cultural and religious repression,” Arkin told reporters in an online briefing before Bach's media duty.

The campaign has urged the IOC to move the 2022 Olympics from Beijing or for a boycott by national teams. About 100 of the 206 national Olympic teams might compete at a Winter Games.

Bach is passionately against boycotts after being unable to defend his team fencing title at the 1980 Moscow Olympics. His West Germany team joined the United States in refusing to go in protest at the Soviet Union’s invasion of Afghanistan.

“Why would you punish the athletes from your own country if you have a dispute with a government from another country?” Bach said. “This just makes no real sense.”

A more recent history lesson is cited by “No Beijing 2022” -- how the IOC said China would become more open and tolerant through Beijing hosting the 2008 Olympics.

“There was a total lack of (IOC) recognition of mistakes around the 2008 Games,” said Gloria Montgomery, of the International Tibet Network, about the October meeting in Lausanne, Switzerland.

If a widespread boycott is unlikely, athletes could play a role amid growing activism in sports and direct engagement with fans and sponsors.

“We do hope the athletes and other participants at the Olympics can do something,” he said, “to send a message to the Chinese government and to the world.”