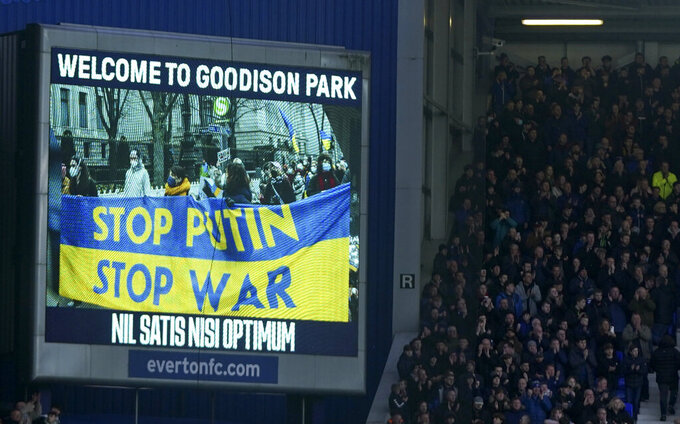 GENEVA (AP) — Russia’s expulsion from international soccer ahead of the World Cup playoffs is heading toward yet another urgent case at the Court of Arbitration for Sport. And Russian sports have had some success in the court.

The Russian Football Union is ready and waiting Friday to file a formal appeal against the joint decision by FIFA and UEFA to exclude its national and club teams from international competitions.

It sets up a fascinating legal contest with time running down on the clock.

In 20 days, the Russia men’s national team is scheduled to play Poland in a qualifying playoff semifinal. The playoff finals are five days later, with spots at the World Cup in Qatar at stake.

Still, that timetable gives the CAS longer than it had last month to judge the case of 15-year-old figure skater Kamila Valieva at the Beijing Olympics.

Russian sport won that blockbuster at the Winter Games. How could the next one go?

The Valieva verdict was ultimately an interim ruling on the fairness of banning or allowing an athlete to compete in a career-defining competition held only every four years. That doping prosecution will be dealt with later.

The Russian soccer appeal could also seek an interim ruling. Three judges would be considering if maintaining a ban would do “irreparable harm” to players who want a chance to advance to the World Cup.

FIFA and UEFA leaders went into emergency meetings and soon suspended Russian teams, saying “football is fully united here and in full solidarity with all the people affected in Ukraine.”

Neither published their legal reasons. Those were being written in Zurich and Nyon to send to the RFU as the basis for its appeal to CAS.

The Russian soccer federation was not suspended and its president, Gazprom executive Alexander Dyukov, remained on the UEFA executive committee but teams were affected. Spartak Moscow was removed from the Europa League ahead of Round of 16 games on March 10 and 17.

FIFA Statutes have since 2016 included a human rights policy which says the sport's world governing body is “committed to respecting all internationally recognized human rights and shall strive to promote the protection of these rights.”

The FIFA case was later strengthened by an International Criminal Court prosecutor now investigating allegations of war crimes in Ukraine.

But it could also be problematic for sports bodies which prohibit political statements and when human rights have been breached in other FIFA member countries.

“That leads us into a direction that is quite difficult to manage for FIFA and UEFA and strays far away from the story of political neutrality,” said Antoine Duval, a sports law expert at the Asser Institute in The Hague.

FIFA and UEFA also have tournament rules which allow action.

World Cup regulations let FIFA intervene “at its sole discretion and take whatever action is deemed necessary” in cases of “force majeure” — the legal term for uncontrollable events that include war.

A special element is the public refusal of several UEFA member federations to play any games against a Russian team. That includes Poland, Sweden and Czech Republic, which are in Russia's World Cup playoff bracket.

Poland captain Robert Lewandowski, the FIFA men’s player of the year, said “we can’t pretend that nothing is happening.”

They took a stand on morality rather than security grounds and gave FIFA a dilemma. Disciplining three members for refusing to play could give Russia a free pass to the World Cup.

This is part of the Russian legal argument. On Thursday, the Russian football federation noted the FIFA-UEFA decision "was taken under pressure from direct rivals in the playoffs, which violated the principle of sports and the rules of fair play.”

Russia wants the entire case decided this month in a fast-track process. That seems unlikely to get FIFA and UEFA consent.

The next option is seeking an interim ruling to freeze all sanctions until the full merits can be heard, which could take weeks or months.

That would let Russia compete, like Valieva did in Beijing, with an asterisk on the result pending a future legal verdict.

There is a precedent for a short-term win in a case ultimately lost.

Just before the 2018 World Cup in Russia, lawyers for Peru captain Paolo Guerrero persuaded a Swiss Supreme Court judge to freeze his ban in a doping case that passed through FIFA and CAS.

The judge decided it was unfair to stop 34-year-old Guerrero playing at his first World Cup — the “crowning glory of his career.”