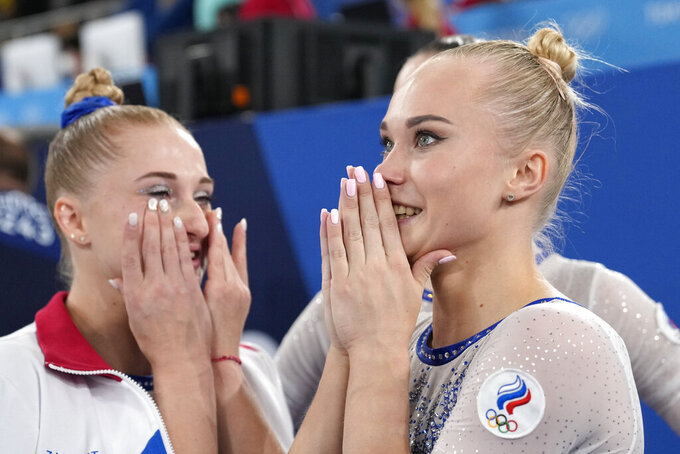 TOKYO (AP) — Angelina Melnikova, a celebrated gymnast from Russia, was gliding around the parallel bars when breaking news started rocketing around the world: Her competitor, American superstar Simone Biles, was scratched from the competition.

Melnikova stuck the landing. She clenched her fists near her heart.

They weren’t yet halfway through one of the most anticipated events of the Olympic Games, and the result had become a near certainty: The team from Russia would soon dethrone the Americans, who just days before seemed unbeatable.

In the end, they beat the U.S. team by nearly 3.5 points, a sizeable margin in the sport.

The night before, they had huddled together in one of their rooms at the Olympic Village and watched the Russian men claim the victory in their team finals. They were inspired by the triumph, the women said.

“We knew it was possible,” 16-year-old Viktoriia Listunova said through an interpreter. “We did not waste our chance.”

With the women's victory Tuesday, the ROC — barred at the Olympics from using its name, flag or anthem over a systemic doping scandal — swept the gymnastics team gold medals, among the most coveted at the Summer Games.

The women stood on the podium and hung gold medals around each other’s necks, then the Russian composer Tchaikovsky’s Piano Concerto No. 1 played.

It was the first time either Russian team won gold at the Olympics since shortly after the fall of the Soviet Union. Both the men and women under the post-Soviet banner of “Unified Team” won in 1992, but faltered in the decades after.

Though the history books may mark Tuesday’s victory with an asterisk due to Biles’ early withdrawal, the Russians’ dazzling performance is the result of a concerted transformation since they finished a distant second to the American team at the 2019 World Championship.

They became the first team in 11 years to beat the Americans in any event.

The first sign that they could topple the American powerhouse came at qualifying Sunday. The Americans wobbled while the Russians performed close to perfectly.

Each member of the Russian team was so good that reigning European champion Viktoria Listunova will have to sit out the all-around finals this week; two of her teammates, including Melnikova, scored higher.

Melnikova, at 21, is the veteran of the team. She was part of the 2016 team that took home the silver medal at the summer games in Rio. She was joined by first-time Olympians 24-year-old Liliia Akhaimova and two 16-year-olds, Listunova and Vladislava Urazova.

Melnikova said that they learned of Biles' withdraw but tried to stay focused.

“This did not distract us," Melnikova said. “We wanted to do the upmost, so we tried not to think about this."

Their performance Tuesday wasn’t perfect: two of them, back to back, fell off the balance beam. Still, the Americans could never catch up.

Melnikova was the last to perform.

“I tried not to think," she said. When she walked off the floor after a flawless routine, she and her teammates knew they'd won gold.

“I knew that it was depending on me and I was feeling overwhelming happiness and I knew I did it," she said. “I knew I had done my job.”

They hugged as they waited. The score flashed on the screen — enough to sail easily past the Americans — and Melnikova bent over, put her hands on her knees and wept.

Biles and the rest of the American team came to congratulate them. They hugged and high-fived.

After the meet Tuesday, they did not like when reporters asked if they thought they would have won had Biles remained in the competition. Biles is human, they said, and all athletes know that you win some days and you lose on others.

“What happened happened," Listunova said, “There are no ifs now."