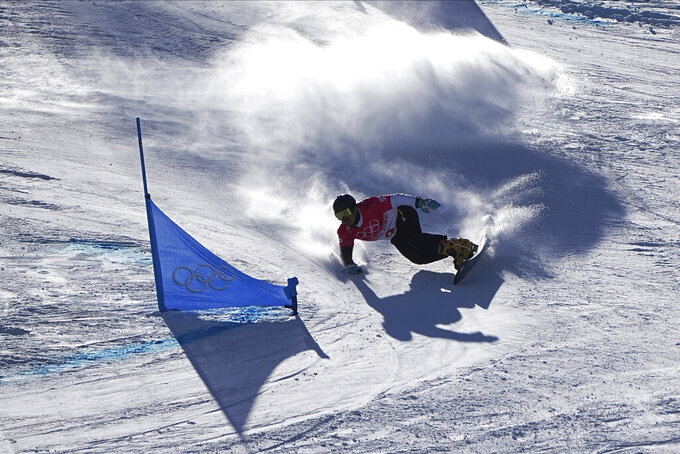 ZHANGJIAKOU, China (AP) — Once upon a time, Vic Wild left his life in America and moved to Russia for love — and for snowboarding.

Eight years after he won gold at the Sochi Games on the same stirring day his now ex-wife took a bronze in parallel giant slalom, Wild walked away with a bronze of his own.

The third-place finish in parallel giant slalom on Tuesday came from out of nowhere — Wild came into this contest ranked 24th. It marked the latest twist to a story that has, at times, read less like sports and more like a political-romance novel.

“I’ve made the best of the situation I’ve put myself in,” Wild said. “And I’ve never once regretted it. How could I?”

To reset, Wild grew up in White Salmon, Washington, but fell in love with Russian snowboarder Alena Zavarzina and married her in 2011. Snowboard racing was dying in the United States, and so it made sense for Wild to seek Russian citizenship to keep his sporting career alive.

His new country fell under a cloud from which it has not escaped to this day.

The 2014 Olympics that marked his greatest moment unleashed a scandal, replete with a torrent of recriminations that filtered across every sport, and cast doubt on every athlete, in his newly adopted country. Time and again, Russia tried to hide, or deflect, the truth. Time and again, the International Olympic Committee and anti-doping regulators took measures to figure out the right punishment.

One major sticking point was finding the fine line between "collective responsibility and individual justice.” The decision to let some Russians compete in South Korea four years ago was widely criticized in the West.

Wild was among those who made it, but it hardly felt like a victory.

Due to the labyrinthine and not-all-transparent vetting process, he didn’t find out he was eligible for those Games until less than a week before the opening ceremony. Unsettled by the uncertainty and with no time to prepare properly, he finished 10th.

“That whole situation was a scam and a sham and whatever else you want to say about it,” he said. “I was clean, always had been, and everybody knew it. When I was the two-time Olympic champion, I should have been one of the first people in the whole thing to be cleared."

All the while, the glow from Wild’s triumphs in Sochi had ebbed. He found himself fending off doubters. Where he had once taken flak from Americans for leaving his home country for Russia, he suddenly found himself getting grief from Russians for really being American. A few months ago, he and Zavarzina divorced. Wild doesn’t want to share the details.

“One thing that bothers me is that in Russia, everybody’s like, ‘Oh, you’re American,’” he said. “And I’m like: ’Yo, bro, I’ve been here for quite a while. I’m still here. I’m not married anymore, and I’m still here.'"

He says he's learned a lot over these past four years. He also did not give up. Even with Russia ostracized in many parts of the global sports community — current sanctions mean he officially competed Tuesday as a member of the “Russian Olympic Committee” team — Wild stayed in shape and kept on riding.

“Most people didn't even think I belonged on this team,” he said. “But, you know, I just had to race.”

Nobody will say he didn't earn this bronze medal. The meat of a PGS contest involves 1-on-1 races that start with a 16-man bracket and whittles down to a final four — two in the Big Final for gold, two more in the Small Final for bronze.

Wild's first victory came against a Russian teammate, three-time world champion Dmitri Loginov. His second victory came against Sangho Lee of South Korea, who was the fastest rider in the qualifying rounds. After that win, a .01-seconds squeaker that guaranteed Wild would be racing for a medal, he let out a loud yelp and punched his fist toward the grandstands.

“Extremely emotional,” Wild said. “To come down the mountain, and cross the finish line and see the result, and it's just ‘holy (expletive).’"

What's next? Probably no more snowboarding. Wild, who still lives in Moscow, says he has started a business that is doing well but wouldn't divulge what it involves. He's been thinking for a while that the toll of traveling the world for a bone-breaking sport that hasn't always given back what he puts in might not be for him anymore.

“I’m just going to enjoy what I did today and think about the future another time," he said. “I'm just super proud I was able to perform at a high level in very different circumstances than it was at Sochi."