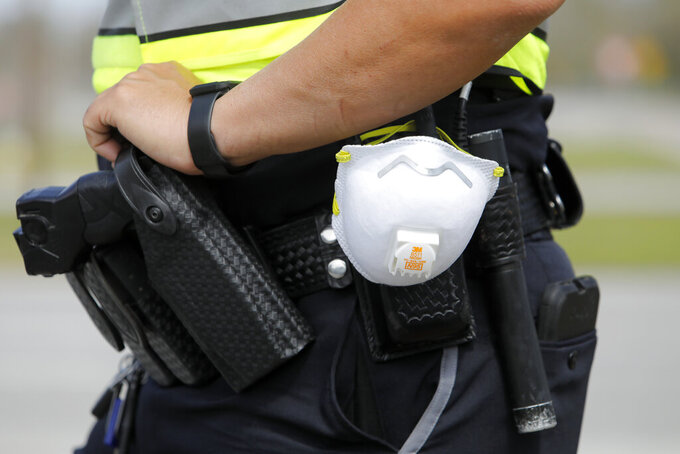 COLUMBIA, S.C. (AP) — South Carolina public health officials are creating a statewide database of addresses of known positive COVID-19 cases, a secure tool only made available to first responders who have argued the information could help protect them.

The tool is especially important after Thursday's announcement the coronavirus patients have now been found in all 46 South Carolina counties.

Although solely intended for the emergency response community, it’s also a step toward the release of more specific information about the location of infections that officials have come under fire for resisting.

The online matrix, according to Nick Davidson, acting director of public health for the Department of Health and Environmental Control, comes in response to local officials' complaints that first responders were being left potentially vulnerable to the disease and also needed that information to conserve protective gear, which is in short supply.

Starting next week, Davidson told The Associated Press, the agency will be live with a “secure, web-based system” that first responders can access to see if a home to which they’re being called has a resident who's tested positive for the new coronavirus. Responders will be able to query the system, which will have known positive cases listed by the address on a patient’s driver’s license.

“We've heard the first response community loud and clear, that they want that information,” Davidson said Wednesday. “The simplest way would be to just hand them a list, but there’s complications with that.”

Most recover from the highly contagious coronavirus, which largely causes mild or moderate symptoms, like fever and cough. But for others, especially older adults and people with existing health problems, the virus can cause severe symptoms like pneumonia and be fatal.

South Carolina had reported more than 1,550 COVID-19 cases statewide as of Thursday with at least one case reported in every county for the first time. Five additional deaths were reporting, increasing the total to 31.

On Thursday, more than twice as many South Carolinians say they lost their jobs in the second week of outbreak-related restaurant and business shutdowns than in the first week, according to the state Department of Employment and Workforce. Nearly 65,000 people made unemployment benefits claims during the week ending March 28.

In two weeks, nearly 96,000 people have reported losing their jobs in South Carolina. If all the claims are approved, the number of people without a job would be up 170% from January unemployment figures when the state reported 56,500 people out of work and a jobless rate of 2.4%.

Davidson said the address system should be live next week, available for any county that wants to use it. Addresses won’t stay in the system forever, he said, dropping out when health officials could “reasonably conclude” the person involved is no longer infected.

“I'm sure it's not perfect, but it certainly is an attempt to try to provide them the information that they want in a timely manner, so that they could take actionable steps,” Davidson said.

State health officials have been scrutinized over information releases concerning the spread of the virus, like calls to release infection numbers by ZIP code instead of just by county. In a lengthy interview Wednesday, state epidemiologist Linda Bell called ZIP code-level releases a “distraction" and reiterated that officials must err on the side of privacy, saying the release of too much information could lead to the accidental identification of a patient, as she said happened in the pandemic's early days.

Bell said the best way to temper the outbreak is for all South Carolinians to act as if anyone with whom they come into contact may be infected, rather than merely avoiding “hot spot” areas. She also added her agency would continue to disseminate information in a way she felt would best safeguard the public.

“What would people do differently if we give more granular information, when what is needed is the measures that we have recommended all along, for the community as a whole?” Bell told the AP on Wednesday. “And that's when we don't release additional information - when it is of no additional benefit to protect the public health.”

Former South Carolina public health chief Catherine Templeton said that, while she heard Bell's worry about people potentially becoming lackadaisical if they thought a certain area had no cases, she would have approached information releases differently.

“While I believe that knowing if you live in a hot zone would go further to keeping you at home, everyone should be operating as if they are in jeopardy,” Templeton told AP. “I would err on the side of releasing the information, but I understand their concern.”

Meg Kinnard can be reached at http://twitter.com/MegKinnardAP