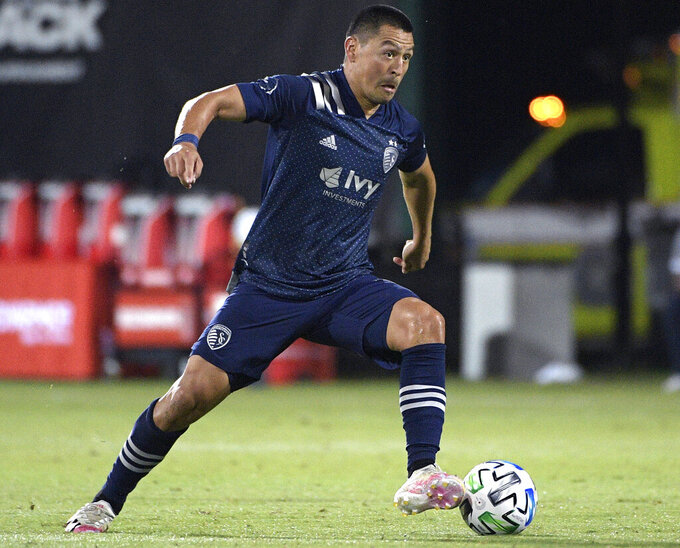 FILE - In this July 12, 2020, file photo, Sporting Kansas City midfielder Roger Espinoza pushes the ball on the pitch during the second half of an MLS soccer match against Minnesota United in Kissimmee, Fla. Espinoza understands that the United States has been consumed by the presidential election but he's disheartened by the lack of response stateside to the Hurricanes ravaging his homeland in Honduras. (AP Photo/Phelan M. Ebenhack, File)

Sporting Kansas City's Roger Espinoza understands the United States has been consumed by the presidential election but he's disheartened by the lack of response stateside to the hurricane that ravaged his homeland of Honduras.

Espinoza, who represented Honduras in two World Cups, is bringing together players from across Major League Soccer to help the Central American nation recover from Hurricane Eta.

“I know a lot of friends, teammates that I had on the national teams, their families, and neighborhoods pretty much are underwater," Espinoza said. “It’s hard because Honduras is the size of a state in the United States. And so it’s a very close country, it’s very small. Anything that happens in the country hits hard just because it’s so small.”

Eta, which made landfall as a Category 4 hurricane on Nov. 3 in Nicaragua, killed at least 120 people as torrential rains brought flash floods and landslides to parts of Central America and Mexico. According to the International Federation of Red Cross and Red Crescent Societies, more than 3.6 million Central Americans, including 2.7 million Hondurans, were affected by Eta.

The region now faces a new threat. Hurricane Iota was designated a Category 5 storm Monday morning and is taking aim at Honduras and Nicaragua.

All of this is happening amid the coronavirus surge, too.

“That’s my biggest concern, people right now are also going into warehouses where they’re being put because they’ve completely lost everything. And so there’s no social distancing there because there’s not much help going on,” Espinoza said. “So that’s my big concern. There’s a lot of young kids and there’s a lot of older people, especially, and that’s very dangerous for them.”

“My whole point is to get the word across and see other nonprofit organizations join us and see how we can make this better for the people of Honduras," Espinoza said. “We all know the pandemic is going on right now, and now people have lost completely their houses. It’s underwater, a big percentage of the country. So we thought that, 'Hey, we need to get this out there because Honduras is going through a huge humanitarian crisis right now.'”

The players are focusing on three charities: Humanity and Hope United Foundation, Operacion Frijol and Food for the Poor.

Espinoza, the 11th pick in the draft in 2008, has spent his entire MLS career in Kansas City, although he played for two seasons in Europe with Wigan Athletic, then in the Premier League.

He has played in 254 regular-season matches with Sporting, scoring 10 goals with 37 assists.

Espinoza is about to embark on the playoffs with Sporting, the No. 1 seed in the Western Conference. The team opens the postseason at home on Sunday against the eighth-seeded San Jose Earthquakes.

This is not the first time Espinoza has reached out to Hondurans in need. In 2015 he traveled to his native country with Unbound, a Kansas City-based nonprofit that seeks to help children and the elderly living in poverty.

“It’s one of the few countries in the world that this is happening to, that you’ve got the pandemic and then now you have the hurricane,” he said. “And so that was my main concern, and that’s why I did that video, trying to raise awareness of what’s going on in Honduras, because, to be honest, not much coverage was given to it. It’s starting to move a little bit more, and I’m happy for that.”