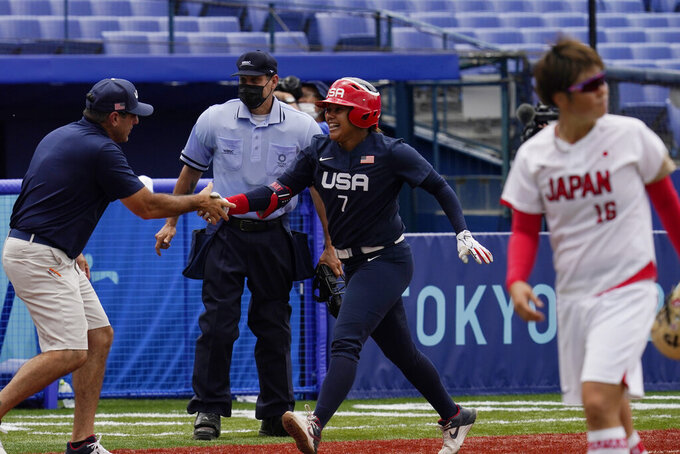 United States' Kelsey Stewart (7) celebrates her game winning home run against Japan as she runs behind Japan pitcher Yamato Fujita (16) in the seventh inning of a softball game at the 2020 Summer Olympics, Monday, July 26, 2021, in Yokohama, Japan. (AP Photo/Sue Ogrocki)

YOKOHAMA, Japan (AP) — Kelsey Stewart has a knack for walk-off hits in Japan.

Stewart hit a game-ending home run leading off the seventh inning, and the United States rallied late to beat Japan 2-1 Monday and win the Olympic softball group stage — and with it the right to bat last in the gold medal game.

“It's like you dream about when you're a little kid, about hitting a home run at the Olympics, let alone a walk-off,” Stewart said.

In August 2018, Stewart's single capped a three-run 10th inning off Japan ace Yukiko Ueno that gave the U.S. a 7-6 win at the Women’s Softball World Championship in Chiba, earning the Olympic berth.

She had been 1 for 12 with no RBIs at the Olympics before she drove the 98th pitch from Yamato Fujita (0-1) for the first U.S. home run of the tournament. Yuka Ichiguchi climbed the right field wall trying for a spectacular grab.

“She was starting to wear down because she had so many pitches on her arm,” Stewart said.

American players ran onto the field to celebrate their second straight walk-off win.

“I knew she was strong,” Fujita said through an interpreter, remembering Stewart from 2018. “I think the ball was too easy for her.”

Trying to bounce back from their 3-1 loss to Japan in the 2008 gold medal game, the Americans finished the group stage 5-0 while Japan dropped to 4-1.

Japan rested Yukiko Ueno, the 39-year-old who beat the U.S. in the 2008 gold medal game started by Cat Osterman, and Miu Goto. Fujita and catcher Yukiyo Mine lost track of the outs, starting to run off the field after Michelle Moultrie struck out for the second out of the third.

Fujita, a 30-year-old right-hander who had pitched just once before in the tournament, didn't allow a hit until Haylie McCleney (an Olympic-best 9 for 14) singled to left leading off the sixth.

Janie Reed, whose husband, Jake, was claimed by Tampa Bay off waivers from the Los Angeles Dodgers earlier in the day, reached on an infield hit with a bouncer to shortstop for just her second hit in 13 at-bats, and Valerie Arioto hit a two-out RBI single.

Ally Carda, a 28-year-old right-hander, allowed an unearned run and four hits over 5 1/3 innings in her Olympic mound debut, striking out nine and walking none.

Monica Abbott and Osterman had combined to throw all 29 innings in the first four games.

“Ally Carda has had tremendous success against them,” U.S. coach Ken Eriksen said of Japan. “Ally was scheduled for this game as soon as the Olympic team was named, because we knew the schedule. ... If we had to win this game to get into the gold medal game, Ally Carda was still going to get the ball.”

Osterman, a 38-year-old lefty, faced two lefties in the sixth and struck out both.

“It was a great opportunity for us to be able to experience all three pitchers today before the gold medal game tomorrow,” Japan coach Reika Utsugi said through an interpreter.

A 6-foot-3 lanky left-hander, Abbott is likely to start the gold medal game scheduled for Tuesday, a day before her 36th birthday. Rain is in the forecast.

“I wouldn't doubt that you might see four pitchers tomorrow,” Eriksen said.

Danielle Lawrie and Lauren Regula, sisters of former Major League Baseball players, combined on a four-hitter in a game shortened to six innings under a rout rule.

Larissa Franklin drove in three runs for Canada (3-2), which headed to a bronze medal game against Mexico.

Jen Gilbert, who had been hitless in seven at-bats, had a go-ahead home run over the center-field cameras in the second. Born in Saskatoon, Saskatchewan, the 29-year-old Gilbert lives in Denton, Texas.

Franklin hit an RBI double in the third, and errors by shortstop Joey Lye and reliever Alexia Lacatena led to three unearned runs in the fifth, which included Franklin’s first sacrifice fly and an RBI single by Jenn Salling, who is 7 for 12.

Victoria Hayward hit a two-run double in the sixth and Franklin followed with another sacrifice fly.

Erika Piancastelli caused an Italian team celebration when her second hit, an RBI single in the third, drove in the country's first Olympic run.

Dallas Escobedo (2-2) pitched a five-hitter, a day after the 29-year-old right-hander beat Italy with a one-hit shutout, and Mexico (2-3) advanced with a tournament-high 11 hits.

Brittany Cervantes singled in the second and scored when Suzannah Brookshire lined the ball down the left-field line and it rebounded off the low fence in foul territory, bouncing past Jade Wall. Brookshire sped to third for a triple and scored on Victoria Vidales’ single.

Wall hit the first home run of the tournament for Australia (1-4) in the sixth.