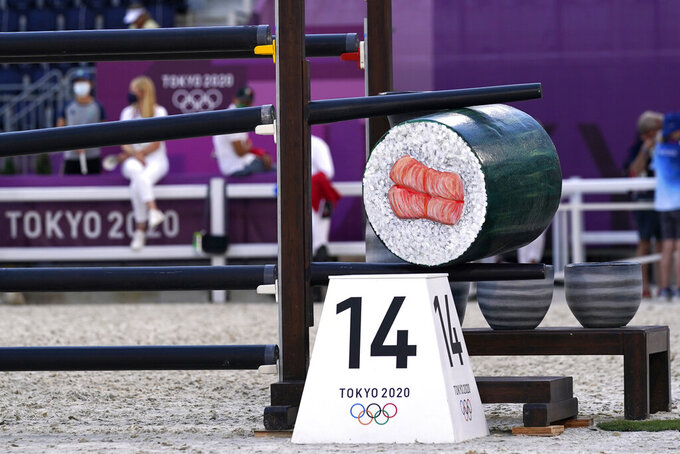 A jump stylized with a sushi roll design is in place before competition begins in the equestrian jumping team qualifying at Equestrian Park in Tokyo at the 2020 Summer Olympics, Friday, Aug. 6, 2021, in Tokyo, Japan. (AP Photo/Carolyn Kaster)

TOKYO (AP) — A sumo wrestler that may have spooked the horses was knocked out of the Olympic equestrian ring Friday night, but the course designer is defending his decision to include the lifelike fighter in the first place.

The statue and a nearby patch of cherry trees that riders thought might be startling the animals during the individual jumping event were among the obstacles swapped out for the start of the team competition.

Course designer Santiago Varela had planned on removing the sumo wrestler for the team competition all along — the change had nothing to do with comments from riders saying the life-sized rikishi might be rankling their animals.

Still, Varela told The Associated Press he was certain the wrestler wasn't at fault for several refusals on the 10th barrier Tuesday night.

"I think this is an artificial discussion," he said after Friday night's team qualifying. "I believe that someone goes to the media to say things that are not true, directly and simply. Horses have jumped very well in the arena.”

Several pairings in the early stages of Tuesday’s individual event stopped short near the sumo wrestler. The hurdle was located right after a sharp turn, and the wrestler's wedgied backside was the first thing in sight for horse and human.

“As you come around, you see a big guy’s (butt),” British rider Harry Charles said, adding “I did notice four or five horses really taking a spook to that.”

The jumping course is always reconfigured between rounds, and several of the Japanese-themed barriers were swapped out Friday. The new fences include a life-size samurai and jumbo-size sushi.

Despite the minor drama, jumpers have been overwhelmingly complimentary of Varela's design. Vivid — and potentially distracting — fences are a trademark of Olympic jumping venues, and in the end, it's the riders' jobs to keep their animals calm on the course, they say.

Varela said the Japanese decor was inspired by a visit to Tokyo and discussions with experts on the region's culture and history. The Spanish designer chalked up Tuesday's issues to inexperienced riders — the Olympic field generally includes a wider range of skill levels than other major equestrian events — and said he'd never include elements intended to trick the horses.

“Honestly speaking, I am not understanding this artificial discussion, because nobody called me and said, ‘OK, this is the reason that we are doing that,'" he said. "I am open to discuss about that without any problem, and I am not saying that I am right. I am saying that I believe that we built the courses in a fair way for the horses, because we always build thinking on the horses.

“I am not scared on this regard because, honestly speaking, I am very happy with the material.”