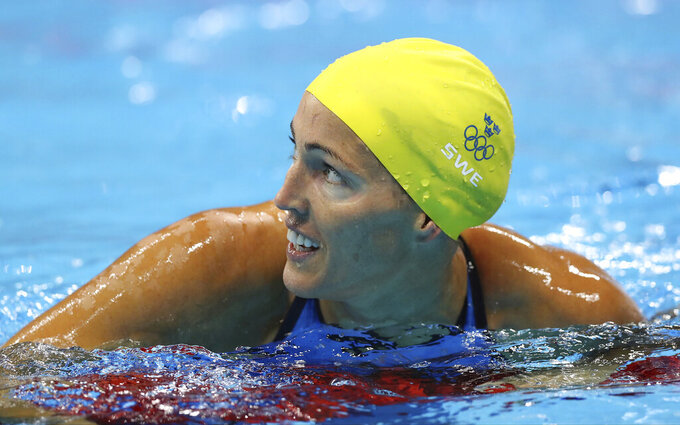 FILE - In this Friday, Aug. 12, 2016 filer, Sweden's Therese Alshammar rests after a women's 50-meter freestyle heat during the swimming competitions at the 2016 Summer Olympics, in Rio de Janeiro, Brazil. Therese Alshammar’s attempt to become the first swimmer to compete in seven Olympics ended Saturday with less than a month to go until the Tokyo Games. The Swedish great missed out on qualifying for a spot on her country’s 4x100 freestyle relay team when she was beaten by an Indian swimmer less than half her age in a two-woman heat at the Seven Hills meet in Rome. (AP Photo/Lee Jin-man, File)

ROME (AP) — Her attempt to swim in a record seventh Olympics fallen short, Therese Alshammar can go back to doing what she loves most these days.

Teaching 5-year-old kids how to swim.

“That’s the best. It’s more rewarding than this,” Alshammar said moments after missing out on qualifying for a spot on Sweden's 4x100-meter freestyle relay team on Saturday.

The 43-year-old Alshammar was beaten by an Indian swimmer less than half her age in a two-woman heat at the Seven Hills meet in her final chance to qualify for next month's Tokyo Games.

Alshammar touched in 57.99 seconds — about two seconds slower than she needed in the 100 free.

Under a searing Roman sun in a half-empty outdoor arena, Northwestern University athlete Kenisha Gupta won the heat in 57.35.

“It was harder than I imagined,” Alshammar said. “If you want to race good you have to practice often. And this year with the (pandemic) it’s been a different year.”

A mother of two kids — ages 8 and 3 — Alshammar decided to make a comeback at the start of the year after having retired in 2016.

“Because of the (pandemic), I trained more but also racing was much harder,” she said. “There was not many competitions to find. And I was never good at the 100 in the last part of my career. So the 100 hurts more than I could remember. Even today — coming out was OK; coming home was terribly hard.”

The comeback wasn't something that Alshammar planned. It just kind of happened because her day job of teaching swimming in Stockholm got suspended when public pools in Sweden were closed because of the pandemic.

So with more time on her hands, Alshammar began swimming seriously again.

The comeback got more complicated when Wallberg contracted the coronavirus.

"I was locked in the hotel room and she was two weeks with the kids,” Wallberg said.

Then Alshammar's back started giving her trouble.

As for her teaching job, Alshammar isn't looking for Sweden's next swimming star.

“No. I’m looking to help people find joy and happiness in sports and healthy habits for life," she said. "If you can make someone who cannot swim feel comfortable and safe in the water, it’s the biggest smile on my face and it’s a great reward for everyone.”

Working with 5- and 6-year-old kids being introduced to swimming for the first time, the biggest goal is teaching them to stay afloat and not be afraid to put their heads under the water.

“Yes. We call it starfish. All they do is lay on their back with their arms out and smile,” Alshammar said.

She can get back to work after the Olympics.

Even though she won't be competing, Alshammar will still travel to Tokyo as a candidate for the International Olympic Committee's athletes' commission.

“My idea was I can be a great reserve," Alshammar said. "If someone falls sick, they can call me from the stands.”

While a seventh games wasn't meant to be, Alshammar remains the only female swimmer to have competed in six Olympics (from 1996 to 2016). Two men have also achieved the feat: Derya Büyükuncu of Turkey and Lars Frölander of Sweden (both from 1992-2012).

Alshammar won two silver medals (in the 50 and 100 free) and a bronze (4x100 free relay) at the 2000 Sydney Games. She also won eight medals at the world championships over her career.

She joins a star-studded list that includes Americans Ryan Lochte, Nathan Adrian and Anthony Ervin as failing to qualify for Tokyo.

Alshammar will compete in the 50 free on Sunday to conclude her career. She's not attempting to qualify in that event and has no plans for another comeback in the future.

“It’s strange coming from me but swimming has a time when you’re young and you don’t have kids," Alshammar said. "The center of your world is your training and yourself. Now, for me, I cannot compare. It’s two different things.”