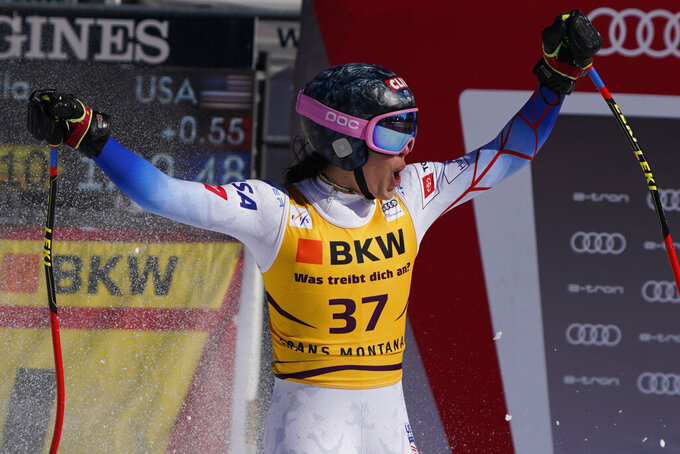 CRANS-MONTANA, Switzerland (AP) — If Swiss skier Priska Nufer was going to have a breakout success at age 30, it surely was going to be on home snow at Crans-Montana.

In a 10-year World Cup career, Nufer never finished in the top five of any race until placing fourth in a downhill Saturday on the same Mont Lachaux course where she thrives.

With victory Sunday, she now has eight career top-10 finishes in World Cup races and six have been at Crans-Montana.

“I am so thankful for this moment,” Nufer said. “Also in Switzerland, (near) by my home town and with all the friends and family.”

On a sun-bathed south-facing slope, Nufer was 0.11 seconds faster than Ester Ledecka, the 2018 Olympics super-G champion who won the downhill on Saturday.

Sofia Goggia was third, 0.23 behind Nufer, and new Olympic downhill champion Corinne Suter was fourth, 0.27 back.

Goggia took downhill silver when defending her 2018 Olympic title in a rapid comeback from knee and leg injuries sustained crashing in January. Until then, she had dominated the downhill season.

“I’m pretty much satisfied about what I did today," said Goggia, “skiing at 70% or maybe a little bit less of the Sofia I was showing off in the first part of the season.”

Goggia extended her lead over Suter in the season-long downhill standings with one race left, on March 16 at Courchevel, France, during the World Cup finals meet.

Mikaela Shiffrin had a small lead in the World Cup overall standings before the Olympics and took a calculated risk that paid off to skip the back-to-back downhills at Crans-Montana.

The American star's rival for the overall title, defending champion Petra Vlhova, posted a 16th-place finish Sunday to follow 29th a day earlier. They are now tied in the standings.

Shiffrin should return when the women’s circuit stays in Switzerland next weekend for super-G and giant slalom races at Lenzerheide.

Though Nufer went to the Beijing Olympics, she was not selected in the four-woman Swiss team for the downhill or super-G speed races. They were won by Nufer’s teammates Suter and Lara Gut-Behrami, respectively.

Gut-Behrami, who failed to finish on Saturday, placed 19th Sunday more than one second behind Nufer.