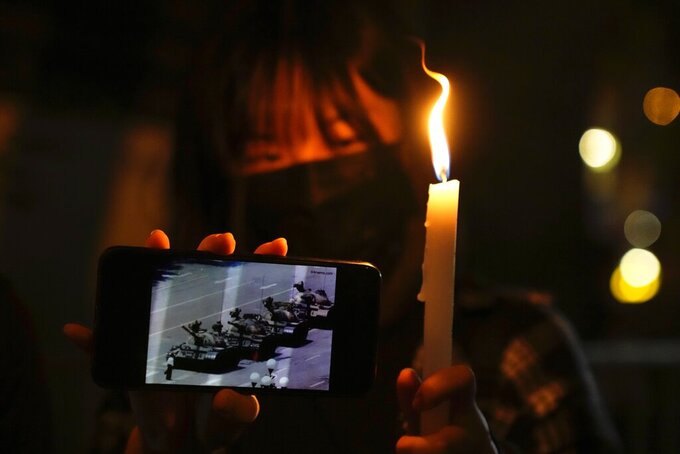 FILE - A woman holds up a ligt candle and a phone showing the image of the 1989 tank man protester during a candle vigil to mark the anniversary of the military crackdown on a pro-democracy student movement in Beijing, outside Victoria Park in Hong Kong, Friday, June 4, 2021. As Beijing prepares to hold the Winter Olympics opening in February 2022, China's president and party leader Xi Jinping appears firmly in control. The party has made political stability paramount and says that has been the foundation for the economic growth that has bettered lives and put the nation on a path to becoming a regional if not global power. (AP Photo/Kin Cheung, File)

BEIJING (AP) — From the deadly crushing of Beijing’s 1989 pro-democracy protests to the suppression of Hong Kong’s opposition four decades later, China’s Communist Party has demonstrated a determination and ability to stay in power that is seemingly impervious to Western criticism and sanctions.

As Beijing prepares to hold the Winter Olympics opening next week, China's president and party leader Xi Jinping appears firmly in control. The party has made political stability paramount and says that has been the foundation for the economic growth that has bettered lives and put the nation on a path to becoming a regional if not global power.

While many have benefitted economically, the price has been paid by those who wanted more freedom, from ethnic groups in the far western regions of Tibet and Xinjiang to the largely student-led protesters in Hong Kong in 2019. The party leadership was divided when an earlier generation of student protesters took control for weeks of the symbolically important grounds of Beijing's Tiananmen Square in 1989. The hardline leaders won and the protesters were crushed rather than accommodated, a fateful decision that has guided the party's approach to this day.

That assumption, he added, proved naive and wrong.

Beijing's hosting of the 2008 Summer Olympics manifested hope that reforms might be on the way, bringing greater space for free speech, independent labor unions and protection of the cultural and religious identities of ethnic groups. Tibetan groups staged protests in China and abroad, disrupting the torch relay.

Nearly 15 years later, on the eve of the Winter Games, the reality is far different. Tibet remains firmly under Communist Party control, and the government launched a fierce crackdown against the Turkic Muslim Uyghurs in Xinjiang in 2017 and enacted new laws and loyalty requirements to drive out opposition in Hong Kong in response to massive protests that turned violent in 2019.

Under Xi, who came to power in 2012, the party has clamped down on dissident voices and anyone who challenges its version of events, from a #MeToo movement that flourished briefly to citizen journalists who exposed the crisis and chaos in Wuhan in the early days of the COVID-19 pandemic.

Xi is now expected to be appointed to a third five-year term as the ruling party’s general secretary this fall, cementing his position as China’s strongest leader since Mao Zedong. With no term limits on the position, Xi could remain leader indefinitely, with no clearly defined rules on succession.

Xi approaches the party meeting bolstered by a strong economy, the ending of separatist violence in Xinjiang and the passage of a sweeping national security law and electoral changes in Hong Kong that have eviscerated the political opposition in the territory.

“There are no checks and balances domestically and internationally. As a result, there is an increasingly authoritarian regime,” he said.

The suppression of the Tiananmen protests marked the end of a period of limited political liberalization in the 1980s. The chaos and violence of the 1966-76 Cultural Revolution and the decline of the Soviet Union had already impressed on the ruling party that political stability should be maintained at whatever cost.

The crackdown carried out with tanks and assault troops was seen as the only way to ensure continued Communist Party rule and what Xi has since termed the realization of the “Chinese dream” of restoring the country's position in the world. The events of 1989 remain a taboo topic in China to this day.

At the same time, the party opened new avenues for education and employment, loosened restrictions on the private sector and welcomed foreign investment. A new generation of young Chinese grew up with heightened expectations and little knowledge of the political turmoil of past years.

Despite their misgivings about the crackdown, China's booming economy was too much of a draw to ignore, and Western democracies swiftly re-engaged with the regime in the 1990s and 2000s.

More recently, the U.S. has turned against China, viewing what is now the world's second largest economy as a growing competitor as well as an opportunity. China's policies in Xinjiang, Tibet and Hong Kong, and on human rights in general, have brought travel and financial sanctions from the U.S. and others on the officials and companies involved.

Beijing has responded with dismissals and disdain. A diplomatic boycott of the Olympics announced by Washington, the U.K. and others was greeted with contempt by Beijing for what it called a meaningless gesture that would change nothing.

China has sought to redefine human rights as improvements in the quality of life, and cites economic growth and poverty reduction as the real determinants. It has written off campaigns by foreign politicians, trade groups and companies to boycott cotton goods and other products from Xinjiang over allegations of forced labor.

China calls such claims “the lie of the century," although some experts say the bad publicity may have prompted it to shut down its prison-like system of internment camps.

But activists' calls to move the Olympics out of China have gone unheeded. A diplomatic boycott won't stop the athletes from competing. Sophie Richardson, the China director for Human Rights Watch, said the International Olympic Committee lost all credibility on promoting human rights after choosing Beijing for the Winter Games.

Kaixi, the former Tiananmen protester and an ethnic Uyghur, said China could not have succeeded in its defiance without the acquiescence of the international community.

“China can only get away with all this because the world is giving in," he said.