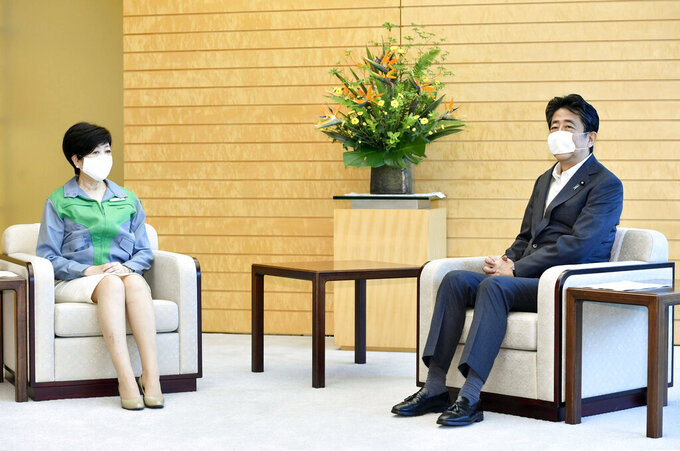 Tokyo Gov. Yuriko Koike, left, talks with Japanese Prime Minister Shinzo Abe at the prime minister's office in Tokyo Monday, July 6, 2020. Gov. Koike, who won her second term to head the Japanese capital in Sunday's election, met with her political rival, Prime Minister Abe and agreed to cooperate in their effort to fight against the coronavirus and to safely achieve the Olympics next year. (Yoshitaka Sugawara/Kyodo News via AP) 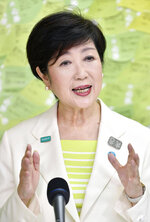 Gov. Yuriko Koike met with Abe a day after winning her second term in an overwhelming victory buoyed by public support for her handling of the pandemic despite a recent rise in infections in the capital region.

Abe congratulated Koike for her victory and said, “Gov. Koike and I will have to cooperate more closely than ever.”

Koike, who wore her work jacket with a Tokyo government logo on the back, said her most pressing task is to prevent the further spread of the coronavirus and asked for Abe's support.

“I will firmly overcome the pandemic with the help of the power of the government, and lead to the Olympics and Paralympics as a proof of our victory,” Koike said.

The first woman to head Tokyo prefecture, Koike, 67, is viewed as a potential candidate to succeed Abe when his term ends in September 2021. A conservative from Abe's ruling party, Koike has also served in key ministerial posts in environment and defense.

For now, she is denying speculation of a return to national politics and says she’s focused on protecting the lives of the 14 million people in Tokyo, a megacity with a $1 trillion economy.

After her meeting with Abe, Koike renewed her campaign pledge to set up a Tokyo version of the Centers for Disease Control and Prevention, by learning from its example and cooperating with the Japanese health ministry and other experts.

The idea, she told a news conference Monday, is not to establish a new organization in a new building but to establish a system aimed at strengthening coordination among infectious disease experts, medical doctors, hospitals and other officials, while cooperating internationally, both in case of an emergency and in ordinary times.

She also tried to gain public understanding for a simpler version of the Tokyo Olympics after the games were postponed to next year because of the virus. Koike only said that officials are still discussing details of the simplified games, cost and coronavirus measures.

Later Monday, she assured Tokyo 2020 President Yoshiro Mori that she plans to continue working with him on achieving the games, and agreed to his proposal to set up a meeting among officials from the government, Tokyo and Olympic organizers to discuss COVID-19 countermeasures.

Public broadcaster NHK said its exit polls showed that 74% of respondents supported Koike, with 63% saying they approve of her handling of the coronavirus.

Though Koike has not fully delivered on her promises to Tokyo residents to relieve congestion on commuter trains, ensure adequate availability of child and elder care facilities and end overwork, even her critics have generally lauded her handling of the pandemic, in contrast to Abe, who has been criticized for doing too little, too late.

As the pandemic deepened in the spring, Koike often upstaged Abe, whose support ratings have plunged due to his handling of the crisis and its severe impact on the economy, on top of a slew of political scandals.

A former TV newscaster, Koike is stylish and media savvy. She earned the nickname “Migratory Bird” for hopping between parties and forming new alliances -— at least seven times — a rarity among Japanese politicians, who are known for their loyalty to party factions.