Tokyo's Olympic fears give way to acceptance, to a point 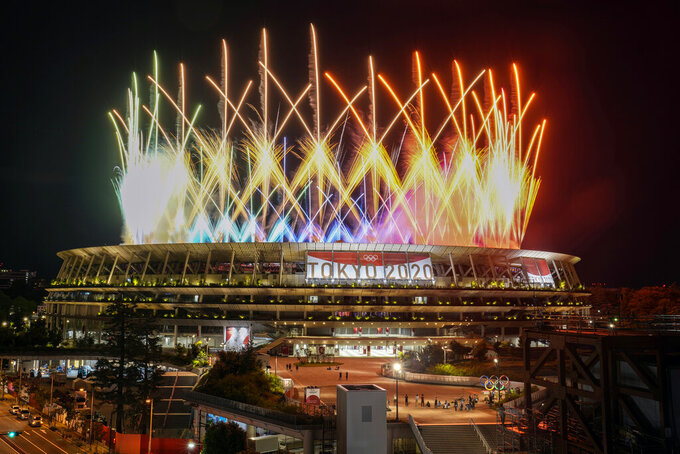 FILE - In this Aug. 8, 2021, file photo, fireworks illuminate over National Stadium during the closing ceremony of the 2020 Tokyo Olympics, in Tokyo. When the Tokyo Olympics began during a worsening pandemic, the majority of the host nation was in opposition, with Emperor Naruhito dropping the word “celebrating” from his opening declaration of welcome. But once the Games got underway and local media switched to covering Japanese athletes' “medal rush,” many were won over. (AP Photo/Kiichiro Sato, File)

TOKYO (AP) — When the Tokyo Olympics began during a worsening pandemic in Japan, the majority of the host nation was in opposition, with Emperor Naruhito dropping the word “celebrating” from his opening declaration of welcome.

But once the Games got underway and local media switched to covering Japanese athletes' “medal rush,” many Japanese were won over. They watched TV to cheer on Japanese athletes in an Olympics that ended Sunday with a record 58 medals for the home nation, including 27 gold.

There are still worries that Japan will pay a price for hosting these Games; recent days have seen record numbers of virus cases. But for now, among many, a sense of pride and goodwill is lingering.

“Having the games in the middle of the pandemic didn’t seem like a good idea, and I did wonder if they should be canceled," said Keisuke Uchisawa, 27, an office worker. But the medal haul, he said, was "very exciting and stimulating. Once the Games started, we naturally cheered the athletes and simply enjoyed watching them."

His wife Yuki, a medical worker, worried especially about the pandemic. But she began cheering when she noticed patients at her hospital beaming as they watched the Games. “I saw the power of sports, and I thought it was wonderful,” she said. “Athletes made outstanding performances, and we wanted to cheer for them.”

The couple were recently picking out matching Olympics shirts and pandemic masks from an official goods store in downtown Tokyo. The store, almost empty before the Games, was crowded on a recent weekday toward the end of the Olympics. Many customers appeared to be workers from the neighborhood dropping by during lunch breaks.

Beforehand, a lot of Japanese expressed reluctance or opposition to holding the Olympics during a pandemic that, for them, was worsening. A series of resignations of Olympic-linked officials over sexism, past bullying and Holocaust jokes also hurt the Games' image ahead of the July 23 opening. There were protests on Tokyo streets and on social media.

After the opening ceremony, however, many opponents started to cheer.

More than half of Japan’s population watched the event, according to rating company Video Research — the highest rating for an Olympic opening ceremony in Japan since 61% for the 1964 Tokyo games, a time when far fewer people had televisions.

Outside the National Stadium, where dozens of demonstrators regularly held anti-Olympic rallies, many fans stood in a line next to the Olympic rings waiting to take selfies. It was the closest they could get to locked-down, spectator-free stadiums.

Opposition to the Olympics has steadily dropped in recent weeks. One poll taken by the Asahi newspaper just ahead of the Olympics showed opponents fell to 55% from around 70% earlier this year, and 56% of the respondents said they wanted to watch the Games on TV. And separate surveys taken by the Yomiuri newspaper and TBS Television at the end of the Games showed more than 60% of their respective respondents said it had been good to hold the Games.

Those who felt intimidated by the unwelcome mood in the beginning began to feel relieved.

“It was a bit scary to get on a train wearing an Olympic volunteer uniform" early on, when people were still more strongly opposing the Games, said Asuka Takahashi, a 21-year-old student who helped at the beach volleyball venue. She felt less tension after the Games started, and thought more people were interested in them than she had initially believed.

And when Takahashi recently visited Olympics stores, she also saw that lots of merchandise was sold out. “Many Japanese,” she said, "are enjoying the Olympics in the end."

Prime Minister Yoshihide Suga, criticized for insisting on hosting the Olympics despite the virus, was likely hoping for this evolution in sentiment. He has been trying to reverse nosediving support ratings for his government ahead of general elections expected in the autumn.

“Japanese Olympians’ outstanding achievements will give us strength, too,” said Tateo Kawamura, a veteran lawmaker of Suga’s governing party. Suga called and congratulated judoka Naohisa Takato, who won the first gold for Japan, and has since publicly congratulated medal winners on Twitter.

Suga has repeatedly said there is no evidence linking the upsurge in cases to the Games — and, in fact, barely more than 400 positive cases were reported inside the Olympic “bubble” from early July until the closing ceremony.

But whether the Games lift public sentiment in a lasting way could hinge on how the virus plays out.

“The government has forced the holding of the Olympics and Paralympics in order to regain popularity ... but it's a risky gamble," Seigo Hirowatari, a University of Tokyo law professor emeritus, said during a recent online event.

While some have tried to see the positive side of the Olympics, others remain opposed. There's a new word floating around to describe what some see as a growing pressure to support or even to talk about the Games: “Oly-hara" or Olympic harassment.

Last week, Japan’s government introduced a contentious new policy in which coronavirus patients with moderate symptoms will isolate at home as the surge of cases strain hospitals. That policy was needed, the government said, in spite of an expansion of the state of emergency from Tokyo to wider areas that will last until the end of August.

“If you turn on the TV, there is nothing else but the Olympic Games, and people are not sharing in a sense of crisis” about the exploding infections amid the festivity, said Dr. Jin Kuramochi, a respiratory medicine expert. “People will see the reality after the closing ceremony.”

Those who opposed the Games say the money should have been spent on health care and economic support for pandemic-hit people and businesses. The $15.4 billion cost of the Games — largely shouldered by Japanese citizens’ tax money — has caused concerns.

That leads to sentiments like the one from Yoko Kudo, a preschool teacher.

“I hope" she said, “at least the rest of the world will thank Japan for achieving the Games despite the difficulties.”