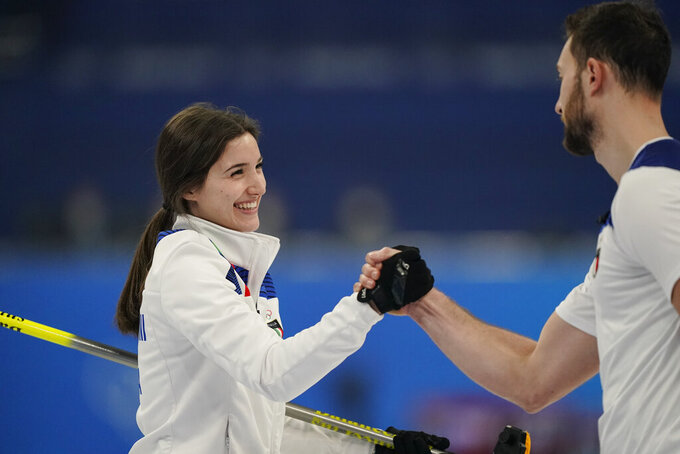 BEIJING (AP) — Just because he made an early exit from the Olympic mixed doubles curling tournament doesn’t mean the week has been a waste for American Chris Plys.

Although the second-time Olympian failed to qualify for the playoffs in the two-person, coed event in Beijing, Plys is also in the men's field — one of a handful of curlers with a second chance at a medal.

“Obviously not an ideal result at the end of of the week, but it’s certainly something I can carry forward into the men’s tournament,” Plys said after he and partner Vicky Persinger lost 8-4 to Britain on Monday to end the round-robin with a 3-6 record. “And it’s just nice to be on the ice.”

While curling traces its roots back 600 years to the frozen lochs of Scotland, the sport didn’t become a regular at the Olympics until men’s and women’s events were added in 1998. Mixed doubles made its debut four years ago at the Pyeongchang Games.

Some national federations require players to choose mixed doubles or four-person curling at the Olympics, but others allow athletes to compete in both. Along with Plys, Britain's Bruce Mouat and Jennifer Dodds, Italy's Amos Mosaner and Sweden’s Oskar Eriksson will be attempting the double in Beijing.

“I’m just really excited that I have two chances to compete at the Olympic games in one visit,” Mouat said. “I can understand why come countries don’t do it, but I’m really glad that ours does.”

Curling ice is an intricately manicured surface, with each arena and even each sheet having its own tendencies. Like a golfer reading a green, the players get a feel for the ice’s speed and curl as a game and a tournament goes on; a mistake of a few millimeters can be the difference between a winning draw to the button and a last-shot loss.

The men’s and women’s teams will have a chance to practice — 15 minutes, per sheet — before their tournaments begin this week at the National Aquatics Center, the swimming venue for the 2008 Olympics that is now known as the Ice Cube.

But a few teams have done the advance scouting.

“All the people that have been playing mixed doubles that are going to go on to the men’s or women’s events are getting to throw rocks and get reps in,” Plys said. “Everybody that’s not here has just been sitting in the village for a week and just thinking about everything.”

Dodds said she will report back to her women’s team on what she’s learned: The ice was tricky at the beginning, but more consistent as the games went on.

For now, though, the British will focus on their semifinal match against Norway, which beat Switzerland on Monday to finish 6-3.

“This is not training for us, mixed doubles,” Dodds said. “We want to come out here and perform.”

In other matches in the preliminary round finale on Monday, Italy beat Canada 8-7 with an extra end steal that required a measurement to determine that Rachel Homan’s final shot was a few millimeters farther from the center of the target than the Italian stone.

The Italians — who have never medaled in Olympic curling, and didn't have much of a curling program before hosting the Winter Games in 2006 — finished the preliminary round with a 9-0 record. They will face Sweden, which advanced to the playoffs with a tiebreaker over Canada.

The Czech Republic beat China 8-6 in Monday's other match.

The Americans finished eighth in the 10-team field. They fell behind early in several matches, needing an eighth-end steal to beat Olympic newcomer Australia in the opener and losing to the Czechs and Swiss, neither of which made the playoffs.

“The teams that caught on to the ice the fastest are the ones that are still here playing at the end of the week,” Plys said. “The first week is what it is, and I can’t let it affect whatever I have to do to go forward.”

Unlike her partner, Persinger's first trip to the Olympics is over.

“So we were happy to make it here healthy. And there was never a point we weren't still scared of getting a positive at any moment. So it’s definitely an extra stressor,” Persinger said. “But I will remember being here and hope that someday I get the chance to come back and I get to see people smile.”