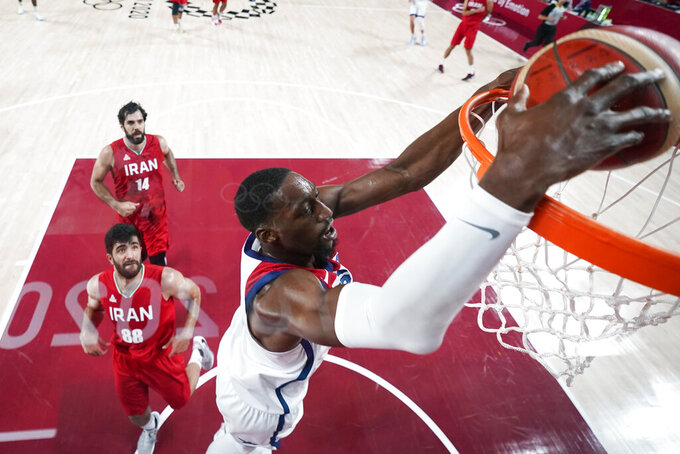 United States' Bam Adebayo dunks the ball ahead of Iran's Behnam Yakhchalidehkordi (88) during a men's basketball preliminary round game at the 2020 Summer Olympics, Wednesday, July 28, 2021, in Saitama, Japan. (Charlie Neibergall/Pool Photo via AP)

SAITAMA, Japan (AP) — There is no aura of invincibility around this U.S. men’s basketball team. It has gone just 3-3 so far this summer, still has work to do just to qualify for the knockout stage at the Tokyo Olympics and seems far from a lock to win its fourth consecutive gold medal.

It’s different than many past Olympics. And the Americans don’t seem to mind.

“I feel like it makes it more fun,” U.S. center Bam Adebayo of the Miami Heat said.

The next fun destination for the Americans, they hope, will be the Olympic quarterfinals. The U.S. can punch its ticket there on Saturday; the sure-fire way to do that would be to beat the Czech Republic in the Group A finale for both nations, though the Americans could still move on even with a loss.

A win would give the U.S. a chance at securing a top-four seed and ensure that the team wouldn’t face any of the three group winners until at least the semifinals. And the losses — two in exhibitions, then the Olympic opener against eventual Group A winner France — have been a benefit to the Americans, Adebayo said.

“We don’t go in every game thinking we’re going to beat everybody by 50,” Adebayo said. “It definitely keeps us on edge and, you know, shows that we can’t mess around.”

The Americans are still big favorites on Saturday; 23.5 points, according to FanDuel, and that line was set after the U.S. had no problem in a 120-66 win over Iran on Wednesday. The 54-point margin of victory — albeit against an overmatched opponent — was the fifth-largest for a U.S. men’s team in an Olympics since NBA players began being used in 1992, and was by the far the best performance by the team yet this summer.

U.S. guard Damian Lillard said the game against Iran, the second one this summer where the Americans had all 12 of their players. It was the first with nobody recovering from flying 8,000 miles the previous day to get to Tokyo after the NBA Finals — as Jrue Holiday, Khris Middleton and Devin Booker were for the France game — provided the blueprint for how this team needs to play.

“I think everybody on our team would agree that it felt good to get out and run, get open shots, create steals and go the other way without having to set plays and use our length and athleticism to our advantage," Lillard said. “I think we can find a way to be consistent at that, we should have a pretty good chance of being successful."

And, perhaps for a couple days, it silenced some of the doubt about whether this U.S. team is good enough to win it all.

“If we win, that’s going to put the rest a lot of the things that have been said, doom and gloom,” USA Basketball senior men’s national team managing director Jerry Colangelo said. “If we don’t win, people will have their opportunity to take shots at anyone and as much as they wish to, for whatever reasons they choose.”

A look men's field heading into the final games in group play:

The men’s field will be pared from 12 teams down to the eight for the knockout stage this weekend, with the quarterfinal games to be played in Saitama on Tuesday. The winners of the three groups, plus the best second-place finisher, will earn top-four seeds. The other two second-place finishers and the best two third-place teams will be the bottom four seeds for the quarterfinals.

France (2-0) is the group winner, no matter what happens Saturday against Iran (0-2). The winner of the U.S.-Czech Republic game will be 2-1 and finish in second place; the loser falls to 1-2 and will have to hope to move on as one of the best third-place teams.

Australia (2-0) has clinched a quarterfinal berth and can lock up first place in its group with a win Saturday against Germany (1-1). Nigeria (0-2) needs a win, and probably by a sizable margin since overall point differential is a potential tiebreaker, against Italy (1-1) in the other Group B game on Saturday to have any chance of advancing. The Italians would advance with a win.

Reigning World Cup champion Spain (2-0) will take on Luka Doncic and Slovenia (2-0) on Sunday to determine who wins Group C and is guaranteed a top-four seed for the quarterfinals. Both teams have already clinched a berth in the knockout stage.

Host Japan (0-2) plays Argentina (0-2) on Sunday. The loser is eliminated and the winner — again, likely depending on the points-differential tiebreaker — may still have a chance to reach the quarterfinals. If Argentina does not advance, it may mean that Sunday would be the last time Luis Scola appears in the Olympics. The 41-year-old Scola, who has appeared in five Olympics, hasn’t said if he plans to continue his playing career.