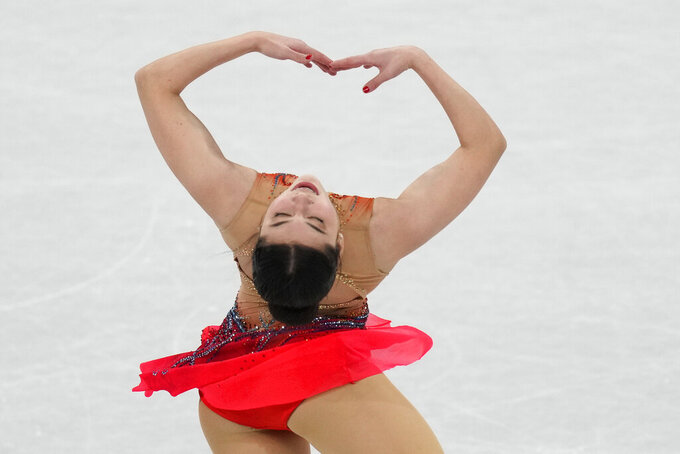 Alysa Liu, of the United States, competes in the women's short program during the figure skating at the 2022 Winter Olympics, Tuesday, Feb. 15, 2022, in Beijing. (AP Photo/Bernat Armangue)

BEIJING (AP) — Three U.S. women advanced to the free skate but struggled to break into medal contention in an event that has been overshadowed by the latest Russian doping scandal.

The dominant Russians had three of the top four spots, and Alysa Liu was the only American breaking into the top 10, in eighth.

“I don’t know how anybody else skated. I only know how I skated. Again, it’s disappointing. I hope that they skated well. And if not, then I guess we’re in the same boat,” said Karen Chen, who came in 13th. “We’ve just got a focus on delivering a more solid long program.”

Liu skated a more conservative program, downgrading her planned triple axel into a double in order to land a cleanly.

Though Liu was all smiles during the program, she said it was a struggle to switch to a new coach late in the season. She shouted out her former coach for helping her with her choreography.

“The change was really recent so it was a hard change, of course, for me,” Liu said. “I’m just really glad I get to show his choreography. Hopefully I did it justice.”

Fellow American Mariah Bell, in 11th, also had a shaky performance. Both she and Chen fell. All three U.S. skaters now advance to the free skate on Thursday, when the medals will be decided.

“I have very mixed emotions about it. I’m bummed with the mistake on that element,” Bell said. “I think it cost me quite a bit of points, but I’m happy with how I came back with everything else. And ultimately, I just really enjoyed skating on Olympic ice.”

Chen’s tumble left her sobbing after she exited the rink, an upsetting turn after an uneven team event showing and a disappointing appearance at the 2018 Pyeongchang Winter Games.

“I’m super disappointed about my skate. I know I’m capable of much better than that. And to not deliver that is, again, just like very disappointing,” Chen said. “I can’t find a better word to describe how I’m feeling right now. I definitely just have to put that behind me and focus on the long program.”

On this night, all eyes were on Russian Kamila Valiev a, who walked away with the top performance at Capital Indoor Stadium. Russian teammates Anna Shcherbakova and Alexandra Trusova came in second and fourth, respectively. Japan’s Kaori Sakamoto was in third.

The 15-year-old Valieva returned to the Olympic stage a day after she was cleared to compete in the individual event. The controversial ruling was made Monday by a Court of Arbitration for Sport panel at the Olympics. Valieva already earned a gold medal when the Russians won the team event last week.

The medals won’t be presented in Beijing, however, because the International Olympic Committee is waiting for the longer-term investigation of Valieva’s doping case to play out.

For Chen, that means leaving Beijing without her silver medal from the team competition. Though that hardware could get upgraded to gold if Valieva is ultimately disqualified, it still means no Olympic celebration here in Beijing.

“I really was looking forward to be on the podium with my teammates and just sharing that moment, and I’m sure I’m not the only one that felt that way,” Chen said. “But what can we do? It’s out of our control and, whatever it is, we just got to go with it and go with the flow. … I think once that everything is over, we’ll definitely try to find a way to celebrate.”