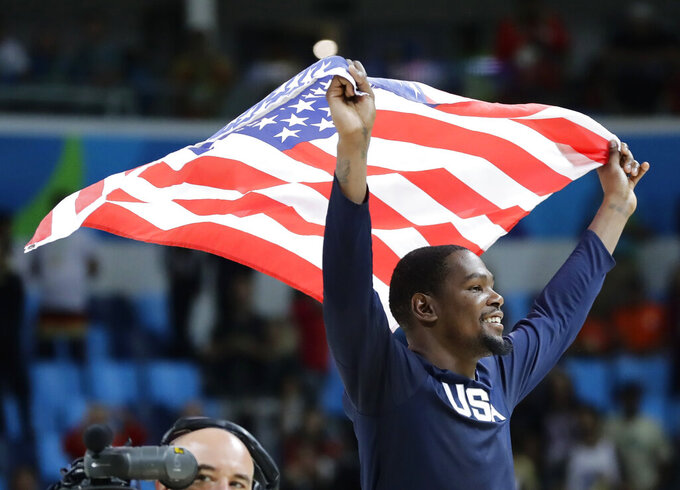 FILE - In this Aug. 21, 2016, file photo, United States' Kevin Durant celebrates after the team won gold in men's basketball at the Summer Olympics in Rio de Janeiro. Durant and coach Gregg Popovich will lead the U.S. team into the Tokyo Olympics as the Americans try to secure a fourth consecutive gold medal.(AP Photo/Matt York, File)

Kobe Bryant, a few months before he died, made an appearance at the Basketball World Cup in China and was asked about the future of USA Basketball.

His message was clear: Gold medals will no longer come easily.

He wasn’t wrong. The U.S. finished seventh at that World Cup, the worst finish ever by an American men’s team at a major international tournament. Now comes a chance for redemption, with the U.S. heading to the delayed Tokyo Games in search of a fourth consecutive Olympic gold medal.

The Americans — coached by Gregg Popovich — will be led by Kevin Durant, seeking his third Olympic gold, and have past gold medalists Kevin Love and Draymond Green back on the roster as well. The rest are Olympic first-timers, including Phoenix's Devin Booker, Miami's Bam Adebayo and Portland's Damian Lillard.

There will be no shortage of legitimate medal hopefuls in the 12-team field: The U.S. tops the list, of course, but Spain, Australia, France and Argentina are among the other nations that can make strong cases as to why they’ll reach the top of the podium in Tokyo.

Spain is the reigning World Cup champion. France knocked the Americans out of medal contention at that World Cup. Argentina has tons of experience, and Australia has been on the cusp of what it believes is an international breakthrough for some time.

Some other things to know about the Olympic men’s tournament:

It doesn’t sound like much, but a shorter game — 40 minutes under FIBA rules, as opposed to 48 minutes in the NBA — is sometimes an adjustment for NBA players. There are other rule differences such as goaltending (in FIBA play, once a ball hits the rim, anybody can tap it in or swat it away without deference to being “inside the cylinder”) and a five-foul limit as opposed to six fouls in the NBA.

Instead of two groups of six teams, the Olympic format has been changed to three groups of four teams. That means fewer games.

The U.S. played eight games at the 2016 Olympics — five in group play (one against each members of that group), then a quarterfinal, semifinal and the title game. But in the new format, teams will be capped at six games, with three in the group stage, then the quarterfinals and followed by the medal round.

It’ll be the fewest games played by a gold medal-winning team since the inaugural Olympic tournament in 1936, when the U.S. won the gold with a 5-0 record and played only four games. Its first opponent at those Berlin Games was supposed to be Spain, which didn’t arrive because of the Spanish Civil War — so the Americans were awarded a 2-0 forfeit win.

There were a record 46 NBA players on the rosters for the 2016 Rio de Janeiro Games and it seems likely that there will be even more in Tokyo. After the U.S. — which fields a 12-man team entirely of NBA players — the team with the second-most NBA faces in Rio was Spain, with seven.

Nigeria may wind up with 12 NBA players on its roster for these games as well, which would make it almost a certainty that the number from Rio would be eclipsed in Tokyo.

The host nation automatically qualifies for Olympic tournaments, so Japan is in the men’s basketball field for the first time since the 1976 Montreal Games. It’s likely that the hosts will have NBA players Rui Hachimura (Washington) and Yuta Watanabe (Toronto) on the roster.

FIBA, the sport’s global governing body, has the U.S. ranked as the top men’s team in the world, followed by reigning World Cup champion Spain, Australia, Argentina and Serbia rounding out the top five. FIBA recognizes 168 different national federations in its rankings.