US, South Africa through to final 8 at Vancouver Sevens 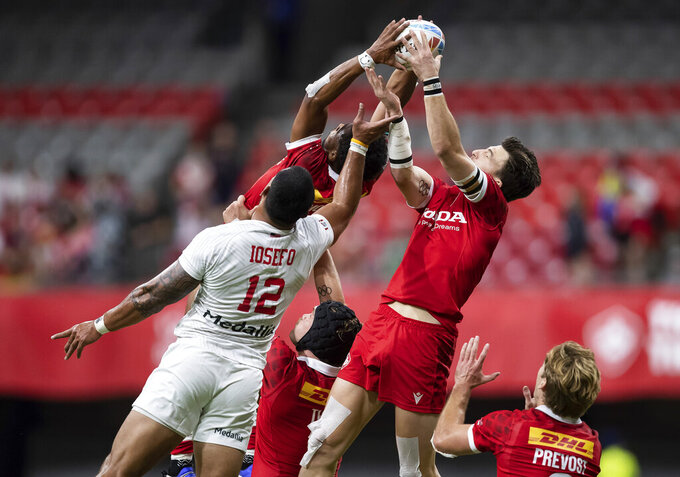 VANCOUVER, British Columbia (AP) — South Africa and the U.S. both went undefeated through the group stage and advanced to the quarterfinals of the Vancouver Sevens World Series tournament on Saturday.

The tournament is missing many of the top-ranked teams due to COVID-19 travel restrictions.

Vancouver was the last tournament to be staged before the COVID-19 pandemic, leading to the cancellation of the rest of the series in March 2020. Despite the series recommencing after an 18-month layoff, Tokyo 2020 Olympic gold medalists Fiji, silver medalists New Zealand, as well as Australia and Samoa are all absent due to COVID-19 travel restrictions.

The U.S. had comfortable victories over Chile 33-5 and Germany 26-7, with Malacchi Esdale scoring three tries in two matches.

In its final pool match the U.S. made a fast start against 2020 Olympic bronze medalists and hosts Canada to set up a 19-7 halftime lead after Adam Channel's two tries. Martin Losefo also scored a double for the Americans as they held on to win 29-19 and through to a quarterfinal against Kenya.

South Africa also made light work of its pool opponents, thrashing Mexico 53-0 with Angelo Davis scoring four tries, before topping Spain 34-7 and African rivals Kenya 33-14 to comfortably win the group and set up a quarterfinal with Spain, which advanced as one of the two best third-placed teams.

Britain and Ireland also finished the first day undefeated, with the rivals having a 7-7 draw in the final group game to give the Irish top place in Pool C on points differential and a quarterfinal match with Hong Kong on Sunday.

In the women's Fast Four event, Britain comfortably won all three of its pool matches and will play Mexico in Sunday's semifinals, with the USA to face Canada.