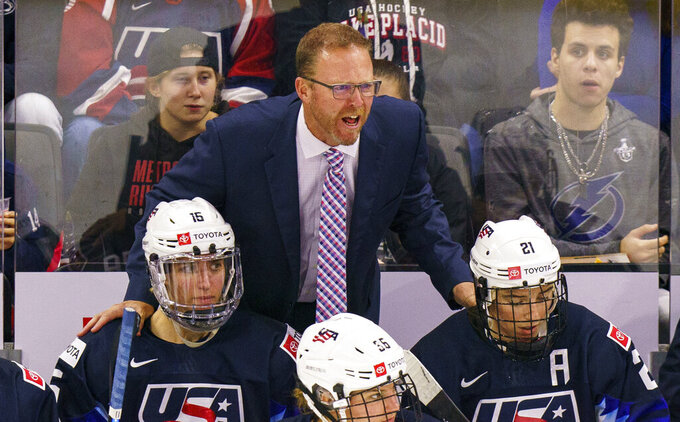 FILE - U.S.head coach Joel Johnson reacts during the third period of a women's hockey game against the Canada, Friday, Oct. 22, 2021, in Allentown, Pa. In April 2021, he was promoted to become the U.S. women’s national hockey team coach following Bob Corkum’s abrupt resignation over COVID-19 protocols at the world championships. In June, Johnson was hired by St. Thomas University in St. Paul, Minnesota, to lead its women’s hockey program making the jump to the Division I level .(AP Photo/Chris Szagola, File)

It’s not often someone gets to experience two chances of a lifetime. For Joel Johnson, opportunity came knocking a mere two months apart.

In April, he was promoted to become the U.S. women’s national hockey team coach following Bob Corkum’s abrupt resignation over COVID-19 protocols at the world championships. In June, Johnson was hired by St. Thomas University in St. Paul, Minnesota, to lead its women’s hockey program that was making the jump to the Division I level.

“I think it’s interesting when someone says perfect storm. It’s still a storm, and it’s still perfect,” Johnson said of juggling two jobs. “And that’s kind of how it feels. It’s a mess. It’s busy. It’s a storm. But it’s perfect. ... And I think it’s awesome.”

Daunting as the responsibilities might be, it helps having both teams based in Johnson's backyard. St. Thomas is a 20-minute drive from the USA Hockey women’s facility in Blaine, allowing him to work with both teams on the same day when the schedule permits.

Also making things manageable is Johnson having the backing of officials at both programs, with the understanding his prime focus this year is preparing the U.S. women to defend their Olympic gold medal at the Beijing Winter Games next month.

The chance to build his own program from the ground up while also coaching on the global stage made it impossible for Johnson to say no.

Then again, as he put it, “I’ve always said yes, and I’ve never been disappointed.”

At 47, Johnson is no stranger to multitasking. During a six-year stint at his alma mater, Bethel University, he coached men’s hockey, men’s and women’s golf, and earned 2010 Minnesota Intercollegiate Athletic Conference soccer coach of the year honors.

He then went on to double hockey duties at Minnesota. As an associate coach, he helped the Gophers win six national titles, while at the same time coaching USA Hockey’s Under-22 women’s team before landing the assistant’s job on the national team under Corkum in 2018.

His familiarity with the U.S. players made him a natural for promotion, while USA Hockey played a role in recommending Johnson for the St. Thomas job.

“It’s been pretty seamless,” U.S. team general manager Katie Million said. “We know that this team is the priority, and we know he’ll do a fabulous job with both.”

St. Thomas assistant Bethany Brausen had no doubts, having previously worked with and played under Johnson at Minnesota.

“He’s certainly spread very thin. But I also knew if there was someone in the country that could do both jobs and do them well it would be Joel Johnson,” said Brausen, who serves as the Tommies head coach in Johnson’s absence. “Even when you get Joel Johnson in a limited capacity, I believe you’re still getting some of the best coaching you could ever get as a player.”

The key is Johnson’s ability to delegate, by often leaving game-day decisions and practice plans to Brausen and fellow assistant Marty Sertich.

Such was the case when Johnson showed up one day and told Brausen he’d serve as her puck-pusher.

“I laughed, because I’m like, ‘You’re the most overqualified puck-pusher in the world,’” she said. “He has the humility to show up and say, ‘Hey, I wasn’t here today and I might not be the best person to make this decision.’”

U.S. players credit Johnson for the trust he places in them.

“We trust what he’s doing, his vision for us and what he has planned for us to be successful in Beijing,” veteran forward Brianna Decker said.

Johnson has taken an upbeat approach in dealing with the stinging memory of a 3-2 overtime loss to Canada in the gold medal game of the world championships in August.

Johnson placed his focus on poring over video and revisiting notes to first determine what he could have done better, before assessing what his players could improve upon.

Just as important was letting go and moving on.

“It’s over. It’s done. And it doesn’t matter anymore because we’re not trying to win the world championships,” Johnson said. “Canada won. Congratulations to them.”

Though the U.S. roster is essentially unchanged from August, there is an expectation younger players, such as defender Caroline Harvey and forward Abbey Murphy (both 19), could see increased ice time in Beijing to counter Canada's speed.

St. Thomas athletic director Phil Esten laughed over how he occasionally bumps into Johnson on campus, in noting the two talk on the phone or text more frequently.

“It’s a once in a lifetime opportunity for Joel, and it’s something that I would never ask him to have given up,” Esten said. “And frankly, it’s one of those once in a lifetime thing for St. Thomas to be able to associate ourselves: Our head coach is also USA Hockey’s head coach. Those are things that don’t come along very often.”

The fledgling Tommies are off to a 4-15-1 start playing in the Central Collegiate Hockey Association, which features the nation's three top-ranked teams.

For Brausen, there’s more than X’s and O’s with Johnson in crediting him for putting in time to get to know his players and staff.

While working together at Minnesota, Brausen recalled sharing a difficult period in her life with Johnson. Following practice, she heard Johnson call out as she was walking to her car.

“He was sprinting out of the rink to come grab me one last time and give me a hug and tell me how much he loved sharing life with me,” Brausen said. “That was a moment just reflective of Joel. He never misses the opportunity to show up for people, and to make it more than just hockey.”