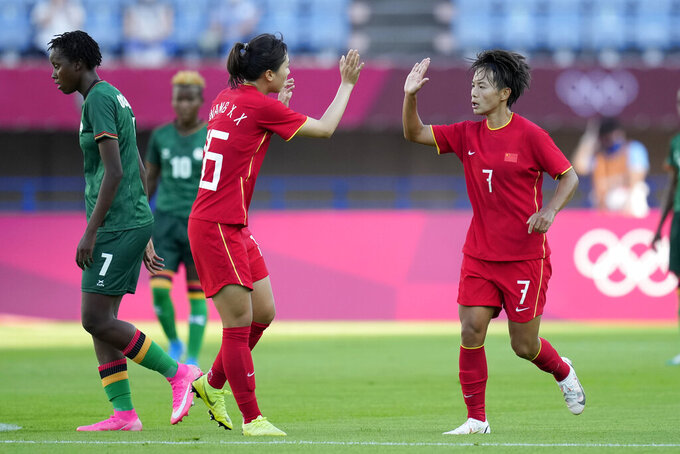 China's Wang Shuang (7) celebrates with her teammates after scoring a second goal against Zambia during a women's soccer match at the 2020 Summer Olympics, Saturday, July 24, 2021, in Saitama, Japan. (AP Photo/Andre Penner)

RIFU, Japan (AP) — Wang Shuang scored four goals, including an 83rd-minute equalizer from the penalty spot, to give China a 4-4 draw with Zambia on Saturday in the group stage of the women's Olympic soccer competition.

Barbra Banda scored three goals for Zambia, her second hat trick in as many games for a team making its first Olympic appearance.

Wang scored in the sixth minute to give China the early lead, but Racheal Kundananji tied it for Zambia in the 15th. Wang then added two more goals within the first 25 minutes but Banda scored on a penalty in the 42nd to close within 3-2 at the break.

Banda scored again in the 47th to tie it before she put Zambia in front 4-3 in the 69th. Wang then scored her fourth in the final minutes.

China, ranked No. 15 in the world and playing in its fifth Olympics, lost to Brazil 5-0 in its Group F opener on Wednesday. Zambia lost to the Netherlands 10-3. Banda scored all three of those goals for Zambia, the lowest ranked team in the field at No. 104.