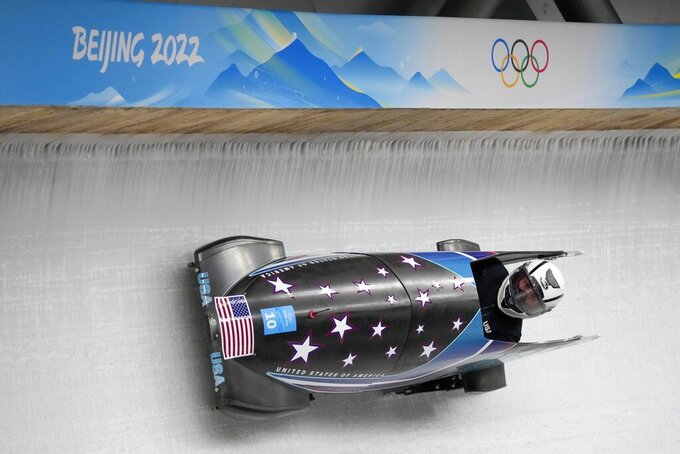 Elana Meyers Taylor, of the United States, drives her bobsled during a women's monobob training heat at the 2022 Winter Olympics, Thursday, Feb. 10, 2022, in the Yanqing district of Beijing. (AP Photo/Mark Schiefelbein)

NBC will have live coverage Saturday night when women’s monobob makes its Olympic debut. Meyers Taylor has dominated the solo discipline, in which drivers work without a brakeman, but she is also coming off a week in isolation after testing positive for COVID-19 on Jan. 29. The time away cost the three-time Olympic medalist her spot as a flagbearer for the opening ceremony.

Bobsled coverage will be paired in prime time with the start of the men’s giant slalom event, where American super-G silver medalist Ryan Cochran-Siegle is pursuing a second medal at these Games.

Elsewhere, the U.S. men’s curling team has a date with Canada in round-robin play, and the always popular ice dance competition opens with rhythm dance.

Monobob’s Olympic debut brings several new wrinkles to a sport that’s been on the Olympic program since 1924. Not only are competitors sliding alone, but they’re doing so in standardized sleds provided by organizers, making the discipline a purer test of athleticism and skill while removing the advantage gained by teams using aerospace science to perfect their vehicles.

Meyers Taylor has been the world’s top monobobber, but it’s unclear what effect her isolation might have. She finally got onto the Yanqing Sliding Center track for the first official practice session Thursday, while others had several unofficial runs before then.

Meyers Taylor passed her time alone by doing makeshift workouts in her room with weights and other equipment the team brought over. If she’s not up to the task, U.S. teammate and fellow three-time Olympic medalist Kaillie Humphries could take gold.

NBC will carry the first and second of four heats for the women’s monobob live beginning at 8:30 p.m.

The opening run of the men's giant slalom will start at 9:15 p.m. and be carried live on NBC, with the second and final round airing around 1 a.m.

Cochran-Siegle and teammate Tommy Ford will compete for the U.S. Ford, a three-time Olympian, was ranked 13th in World Cup giant slalom and is the more likely bet to medal.

John Shuster and the American men's curling team faces rival Canada, and CNBC will carry the match live at 8 p.m.

Shuster was a flagbearer for the U.S. at the Beijing opening ceremony after skipping his country to a breakthrough gold in Pyeongchang four years ago. The U.S. knocked out powerhouse Canada in the semifinals of that tournament.

Viewers can have twizzles with their coffee as the ice dance competition runs live on USA Network at 6 a.m. An encore presentation will air between 8 p.m. and 11 p.m. on NBC.

The Americans have a chance to earn two ice dance medals in the same Games for the first time. Madison Hubbell and Zachary Donohue finished fourth at Pyeongchang and second at last year's world championships. Madison Chock and Evan Bates were fourth at worlds.

Four-time world champions Gabriella Papadakis and Guillaume Cizeron of France are heavy favorites. They finished second in Pyeongchang to Canadian duo Tessa Virtue and Scott Moir, who have since retired.

American-born Eileen Gu begins her push for a second gold medal for host China when the women’s freestyle skiers open qualifying in slopestyle. USA Network will carry qualifying live when it begins at 9 p.m. ... NBC will also show the final heats for women’s skeleton on tape delay during its prime-time coverage. ... Mikaela Shiffrin's shaky Olympics continue with training for women's downhill, which will air live on USA Network around 10 p.m.

This story has been corrected to fix the first name of bobsledder Elana Meyers Taylor.