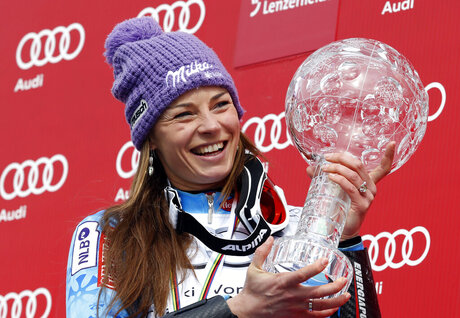 By: ERIC WILLEMSEN (AP)
SOELDEN, AustriaCopyright 2020 The Associated Press. All rights reserved. This material may not be published, broadcast, rewritten or redistributed.
46.966711

SOELDEN, Austria (AP) — The skier best known for crushing the overall World Cup points record and celebrating her victories with a cartwheeling handspring, announced her retirement.

Two-time Olympic champion Tina Maze of Slovenia said on Thursday she will quit the sport after competing in one more race, a World Cup giant slalom on home soil in Maribor on Jan. 7.

"I am really happy with what I've achieved. I don't feel the need to compete at such a high level anymore," Maze said.

The Slovenian started her World Cup career with a GS in Maribor, as a 15-year-old in 1999.

The four-time Olympian's announcement was not unexpected.

A few weeks after winning two gold medals at the 2015 world championships in Vail and Beaver Creek, Colorado, Maze was beaten for the overall title by Anna Veith, then competing under her maiden name, Fenninger. Maze took a year off from the slopes and got her degree in elementary education.

The move prompted year-long speculation about her career, but Maze always kept all options open until announcing her decision two days before the World Cup season-opener on the Rettenbach glacier in Soelden on Saturday.

"I was always thinking about it," Maze said. "I have a big motivation to compete one last time in front of my home crowd."

Maribor will be her last World Cup, but Maze did not rule out defending her world downhill title in St. Moritz in February.

"Now I live by the day," Maze said, adding she will decide about a start in Switzerland in the weeks leading up to the championships. As the defending champion, she wouldn't have to qualify.

Maze's rise to the top started in 2008 when she set up her own independent team, led by her Italian coach and boyfriend, Andrea Massi. They called it the Team to aMaze.

Maze won her first of 13 medals at major championships the following year, taking GS silver at the worlds in Val d'Isere, France. She added two more silver medals at the Vancouver Olympics the next year.

Finishing fourth in the 2010 overall World Cup standings, Maze improved one spot each year and finally won the big crystal globe to cap a record-breaking season in 2013.

Maze won 11 races that season, took the GS and super-G titles, and broke the overall World Cup points record in a single season. She beat the previous mark of 2,000, set by Austrian great Hermann Maier in 2000, by another 414 points.

The same season, Maze also became only the sixth female skier to win events in all five Alpine disciplines, with American standout Lindsey Vonn the only other active achiever.

Her World Cup results faded in the following season, but Maze went back to the top when she won Slovenia's first ever gold medal at the Winter Olympics by sharing victory in the Sochi downhill with Dominique Gisin of Switzerland.

"At the moment it is not easy for me," Massi said, adding he was particularly proud of his girlfriend reaching the top of her sport without doping.

"Tina is the best proof to young athletes that you can become the best on normal food: Schnitzels, pasta, vegetables, and goulash soup."

Known as a gritty competitor who doesn't try to hide her mood after not winning a race, Maze once said she becomes "completely inaccessible" when things are not going her way.

"That is just who I am. I certainly do not want to be rude," said Maze, who in 2012 displayed her singing talent by entering the charts in her home country.

The song was fittingly named, "My way is my decision."