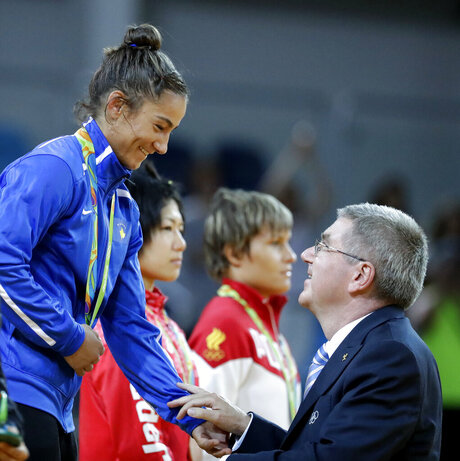 RIO DE JANEIRO (AP) — The IOC will keep trying to enforce a rule that would prevent former doping cheats from competing in future Olympics.

In an interview with The Associated Press, IOC President Thomas Bach said Monday that he will make a third attempt to push through an OIympic ban on any athlete who has received a serious drug sanction.

"Where there is a serious doping offense, this athlete from my personal view should not have the right to compete in the Olympic Games," Bach said. "If somebody is taking steroids for weeks and months and has a whole system around him, there is so much cheating energy I do not think such athletes should compete ever again."

The Court of Arbitration for Sport has twice struck down a rule that would exclude athletes with prior doping cases from the Olympics, including a proposed ban on former Russian dopers from the Rio de Janeiro Games.

CAS has rejected the rule on grounds that it punishes an athlete twice for the same offense.

" I don't give up," Bach said during an interview at the AP offices in the main press center in Rio. "Now when we are talking about the review of the anti-doping system, this is one of the questions the IOC will bring to the table again. We will look for solutions in this respect because we want the games to be clean."

In 2011, the International Olympic Committee passed the so-called "Osaka Rule," a measure which would have barred any athlete who had served a doping sanction of more than six months from entering the subsequent games. That was thrown out by CAS ahead of the 2012 London Olympics.

"This is one of the reasons the IOC always wanted, and if you asked me personally still want, that athletes who have been sanctioned for doping should not be allowed to participate any more in the Olympic Games," Bach said. "Unfortunately this has not been approved by CAS now for the second time.

"I hope we will have another chance now," he added. "I'll make another try. So we have lost twice. That encourages us to try a third time."

The IOC decided not to ban the entire Russian team from the Rio Games, despite evidence of state-sponsored doping detailed in a report by World Anti-Doping Agency investigator Richard McLaren.

Instead, the IOC gave international sports federations the authority to decide which individual Russian athletes could compete. At the same time, the IOC also decided that any Russians with previous doping sanctions would be barred from the games.

However, the Russian ban was thrown out by CAS in the case of several athletes, including world champion breaststroker Yulia Efimova, who has served a 16-month suspension for doping.

Her participation has caused a flashpoint at the swimming venue, where she was greeted by a smattering of boos after winning her preliminary heat Sunday. American swimmer Lilly King wagged her index finger in a "no, no, no" gesture after Efimova's semifinal victory.

"During the opening ceremony the Russian team was welcomed in a friendly way," Bach said. "There is some suspicions with regard to doping, not only with regard to Russia."