Home » Spain » AP INTERVIEW: Ricky Rubio opens up about loss of his mother 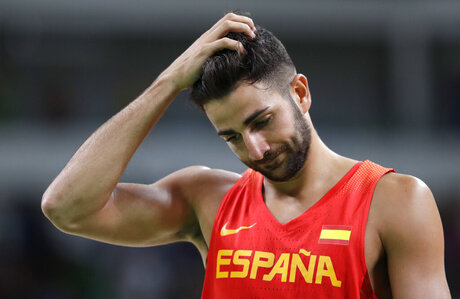 By: JON KRAWCZYNSKI (AP)
RIO DE JANEIROCopyright 2020 The Associated Press. All rights reserved. This material may not be published, broadcast, rewritten or redistributed.
-22.9028-43.2075

RIO DE JANEIRO (AP) — There are few things in this world Ricky Rubio loves more than basketball, the electricity he feels when he's on the fastbreak, teammates running with him and a no-look lob pass just begging to be thrown.

His mother, Tona, was certainly one of them.

The point guard spent all of last season with the Minnesota Timberwolves watching from afar as Tona's body slowly succumbed to lung cancer, and there were times that he wondered if he should be playing at all.

"Sometimes at night during the season I was going through hell," Rubio told The Associated Press as Spain prepared for a showdown with the United States in the Rio Olympics semifinals Friday. "Waking up in, who knows, Sacramento, in LA, in the middle of the night alone in a hotel and thinking, 'Why am I here? Is it really worth it?'"

When Timberwolves president and coach Flip Saunders died suddenly from lymphoma in October, it rocked the organization and Rubio in particular. Watching Flip's son Ryan, an assistant coach on the team, grieve put a permanent pit in Rubio's stomach, giving him the sinking feeling that he was getting a glimpse into his own future.

Sometimes during video chats — Tona's was the first voice Rubio wanted to hear after a win or a loss — she would have to step away while becoming ill. He scrambled back home after the season was over and spent about six weeks with her before she died on May 25 at the age of 56.

"Anyone can say he's close to his mom," said Lucas Charte, Rubio's close friend and manager. "But when you see Tona and Ricky and how their relationship went, it was something else. There was a kind of connection between them. They were too similar. Ricky has a brother and a sister. Nobody's parent will tell you they have a favorite. But you could tell Ricky was Tona's favorite."

Rubio has always looked forward to playing for the Spanish national team. He started practicing with them at 16 and sees his teammates as a surrogate family that helped raise him from a child prodigy into a trusted veteran.

But when Tona passed, Rubio thought long and hard about pulling out of Rio to be with his father and two siblings back in Spain.

"At one point when everything happened, you think what's the best?" Rubio said. "Stay with your family? Stay back home? Or sacrifice one more time everything for one goal, which is the gold medal, and dedicate it to her."

Rubio tore the ligaments in his left knee at the end of a promising rookie season in 2012, causing him to miss the London Games that summer. He watched his beloved teammates fall to the United States, 107-100, in the gold-medal game. On his first day of rehab, Rubio vowed to physical therapist Andre Deloya that he would bring him to Rio four years later. Deloya never mentioned the promise again, but when it came time, Rubio had the tickets ready for him and his wife.

One promise kept. One to go.

Spain started the tournament 0-2 and Rubio was not playing well. Tona was not there, and he could not get her absence out of his head.

"I had a lot going on in my mind. It started with doubts. I started wondering if all the sacrifice was worth it," he said. "I put a lot of pressure on myself, like I've been doing my whole career. At one point I decided to forget about all the pressure and just play for fun and do my game and enjoy what I do."

He has gradually settled in, and Spain is humming heading into the rematch with Rubio at the controls. In the first two games of the tournament, Spain was outscored by six points in the 28 minutes he was on the floor. In their last three victories, they have outscored their opponents by 67 points in Rubio's 59 minutes.

The mighty Americans — winners of 50 straight games in international tournaments — have shown some rare vulnerability in this tournament, emboldening challengers like Spain and Australia.

"It would mean everything for us," Rubio said of a win on Friday. "It would mean the world. I remember watching Argentina beat the U.S. in 2004 and I think maybe the same story that Argentina wrote with the 'Gold Generation,' we can write, too."

Rubio wants to win for Spanish fans after falling short against the U.S. in the gold-medal games in Beijing and London. He wants to win for teammates Pau Gasol, Juan Carlos Navarro and Jose Calderon, who may not have another Olympic run in them.

Most of all, he wants to win for Tona.