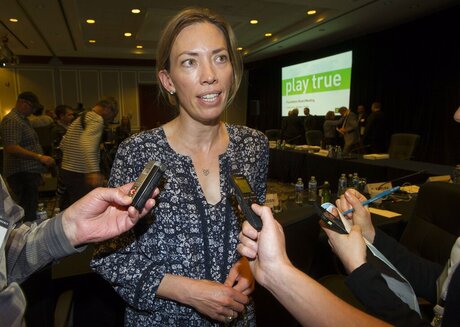 LONDON (AP) — The head of WADA's athlete commission contends the global anti-doping system is not "broken" and laments that politics surrounding the Russian doping scandal has sown "discord" in the fight against performance-enhancing drugs.

Beckie Scott, who chairs the World Anti-Doping Agency athlete committee, urged all sides on Wednesday to put aside their differences and work together to combat "an undeniable threat to the integrity of sport today."

In an op-ed released by the Montreal-based agency, the former Olympic cross-country skier from Canada noted that WADA "has come under intense criticism and scrutiny" in the wake of the allegations of state-backed doping in Russia.

"'Why?" Scott said. "For successfully fulfilling their mandate and taking the necessary decisions."

"To be clear, 'the system' is not broken," she added. "If it were, the exposure of systematic and state-controlled doping in Russia by WADA would never have happened."

McLaren's report led WADA to call for the exclusion of the entire Russian team from the Rio Games. The IOC rejected the recommendation, instead asking individual sports federations to determine which Russian athletes could compete.

"It is unacceptable that when it comes to clean, fair sport, there is a sense of discord when there should be harmony," Scott said. "Almost every day someone new from the Olympic family takes to the media with the critical claim that the global anti-doping 'system is broken.'"

"The issue has become so deeply divisive and conflicted among stakeholders that it seems athletes have another competitor in the ring — politics," Scott said. "Cynicism alone will not win the fight."

Scott's comments were released three days before an Olympic summit in Lausanne, Switzerland, that the IOC says will focus on developing "a more robust, more efficient and more independent" worldwide anti-doping system. IOC President Thomas Bach has called for the entire testing system to be independent from sports organizations.

"We have to be solution focused and can no longer afford to become subject to the politics, conflicted interests and game-playing that has held us back for so long," Scott said.

With WADA's future role and status under scrutiny, Scott said the agency should be given the autonomy to effectively monitor compliance with global anti-doping rules, apply sanctions and serve as the "regulatory body" for anti-doping efforts around the world.

"We need to ask ourselves, what is the cost?" she wrote. "What price are we willing to pay for clean, legitimate sport? We must find new ways of funding the quest for a level playing field."

Scott originally finished third in the 5-kilometer pursuit at the 2002 Salt Lake City Olympics, but was eventually bumped up to the gold medal after the two other medalists were caught for doping.