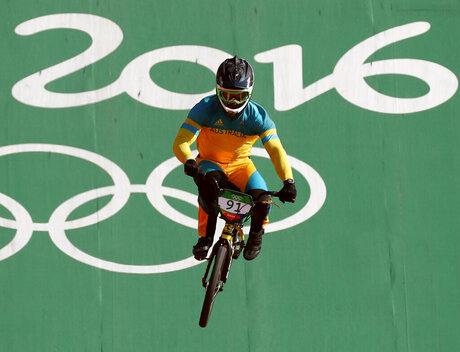 By: GENARO C. ARMAS (AP)
Copyright 2020 The Associated Press. All rights reserved. This material may not be published, broadcast, rewritten or redistributed.

Australian BMX cyclist Sam Willoughby is in rehab following a training accident that left the 2012 London Olympics silver medalist with two fractured vertebrae and no movement below his chest.

Willoughby was hurt last month in the crash at his home track at the U.S. Olympic Training Center in Chula Vista, California, the rider's family has said in a statement through Cycling Australia.

Willoughby was airlifted to a hospital, and doctors performed an operation that involved replacing one vertebra with a titanium cage, and the fusion of two others.

His fiancee, U.S. BMX rider Alise Post, and his family have set up a website to update his condition. The family said Willoughby has slowly regained the use of his arms, and that he is slowly regaining sensations in his legs, but still had no movement from his chest down.

"He is keeping a positive attitude and working hard toward his goal of walking down the aisle with his fiancee," Willoughby's friend, Tyler Brown, who runs the public track at the Chula Vista facility, said this week.

Post won a silver medal at this year's Summer Games in Rio de Janeiro. Willoughby was a favorite in the men's draw, but finished sixth in the final. A wedding date was set for April 15, 2017.

Post has put her schedule on hold to stay close to Willoughby, missing a race in South Carolina and skipping a trip to the White House for U.S. Olympians.

"As much as I would love to be celebrating my recent Olympics success ... right now the most important thing for me is to be here for (Willoughby) as he faces the biggest obstacle of his life," Post wrote on Instagram last week.

BMX riders have rallied around Willoughby, scheduling fundraisers to help pay for medical bills. One such event is being held by Olympic gold medalist Connor Fields on Oct. 14 in Boulder City, Nevada. Arielle Martin-Verhaaren, who qualified for the 2012 Olympics, is holding a charity event in Hampton, Virginia on Oct. 22; and Brown is organizing an event at the Chula Vista track on Nov. 5.

"The BMX community have been amazing coming together to help a fallen rider and do everything they can to raise funds for him in his time of need," Brown said in an email.

Website for information and updates from Willoughby family: https://road2recovery.com/cause-view/strengthfor91/

This story corrects spelling of "finacee" throughout.