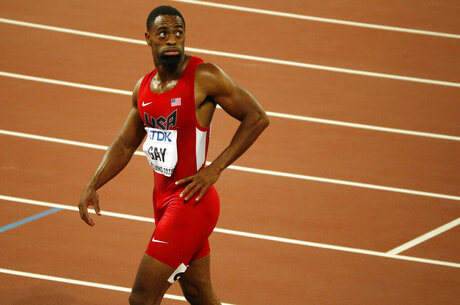 Tyson Gay elected not to compete in the opening day of USA Bobsled's national push championships in Canada, getting a little more time to transition from being an Olympic sprinter to someone who runs on ice.

Another sprinter stole the show instead.

Ryan Bailey, in only his second week in the sport and first time competing on ice, won the men's brakeman competition Wednesday — enhancing his chances of making the national team. Bailey won the preliminary championship last month, though that was on dry land and left him with no expectations coming into his first time racing on ice.

"To get a chance to compete in the Winter Olympics would be amazing," Bailey said. "Never in my wildest dreams did I think it would be possible, so getting this chance is mind-blowing."

Bailey was part of the 2012 Olympic team at the London Games, a teammate of Gay's there. Gay was recruited to bobsled this summer after the Rio Games, in part by Willie Gault — the former NFL wide receiver who also was a bobsledder.

Gay got to Calgary, which has an indoor facility that's hosting these championships, earlier this week. USA Bobsled said "it was decided that it was in Gay's best interest to focus on learning" Wednesday and not immediately jump into competition.

A number of other Olympic veterans, of the Winter Games variety, also got titles on Wednesday.

Two-time Olympic medalist Elana Meyers Taylor won the women's pilot title, the eighth start title of her career and the fifth since she left the brakeman's seat and became a driver.

"It's great getting everyone back together on ice," Meyers Taylor said. "We train all summer for this. It's what we live for. It's so much fun to be back out there, to see everyone making improvements."

"The time off was good for me," Evans said. "There's a lot that goes into the sport and competing on a high level, so the time off gave me a lot of mental clarity and let my body heal up."

Olsen made the switch from pushing sleds to driving them after the 2014 Sochi Games.

"I feel rejuvenated mentally with my new journey as a driver," Olsen said.

Competing in the push championships is ordinarily a requirement to be eligible for national team consideration. But that rule doesn't apply to rookie hopefuls, so Gay — who could compete in other events this weekend — still is in the mix to compete in team trials next month. It also doesn't apply to injured athletes like longtime USA-1 driver Steven Holcomb, the three-time Olympic medalist who was excused Wednesday because of an injury.

"I'm just being cautious," Holcomb said. "I had a slight training mishap a couple weeks ago, nothing major."