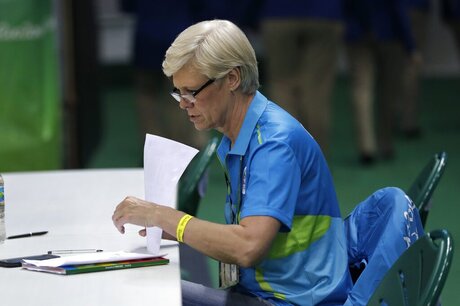 By: TERESA M. WALKER (AP)
RIO DE JANEIROCopyright 2020 The Associated Press. All rights reserved. This material may not be published, broadcast, rewritten or redistributed.
-22.9028-43.2075

RIO DE JANEIRO (AP) — Jill Rankin Schneider no longer has to wonder what it's like being at the Olympics, even if she'll never know the feeling of actually competing in the games.

She was a member of the second U.S. Olympic women's basketball team. But when America boycotted the 1980 Moscow Games, the Olympic window for Schneider — and many others — closed.

Now Schneider is at the Rio de Janeiro Games working with FIBA thanks to an assist from USA Basketball.

"This has really been a great experience," Schneider said Sunday after the U.S. routed China 105-62 in women's basketball.

FIBA always has someone at each Olympics as an observer who compiles a report for the competition committee. With men and women playing games at separate arenas through the first nine days at the Rio Games, USA Basketball got a call looking for a recommendation.

"Jill has been doing a lot for us," Callan said. "She was a youth 17 national team coach, an Olympian and sort of a nice twist to all of this of course is she was an Olympian when the boycott occurred. So when we asked her to go, it just seemed like a special fit because it gave her an opportunity that she didn't have before."

Schneider had never attended the Olympics. Not because of any grudge involving the 1980 boycott. The games simply seemed from another world to Schneider.

"It was like the Olympics were this huge event you watched on TV," said Schneider. "I don't know if I ever envisioned myself being at one."

That doesn't mean Schneider, now 58, has completely moved past any bitterness from 1980.

Schneider helped the University of Tennessee reach the AIAW national championship game, but after the boycott, she turned to coaching. She was inducted into the Women's Basketball Hall of Fame in 2008 and has coached at Lubbock-Monterey High School in Texas since 1998. She also teaches college algebra.

Schneider has been at every women's basketball game in group play and will be at every game in the medal round. She also has gotten to see some rugby sevens, equestrian and shooting near the basketball arena.

She also stood for "The Star-Spangled Banner" at five games won by the Americans, though just off the edge of the court itself.

"It's kind of nice to be here and get a sense of what it would've been like," Schneider said. "Of course, it was how many years ago? It was 1980, but it's always just something, that lingering kind of disappointment I didn't get to experience it as a player."