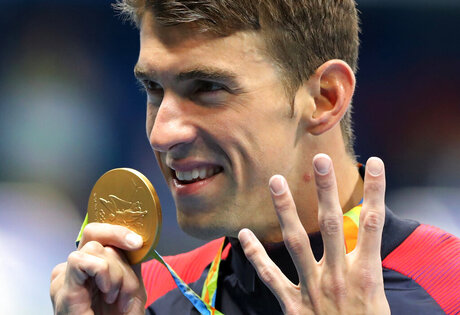 NEW YORK (AP) — Rowdy Gaines clearly had much to say as Michael Phelps turned the race for his 22nd Olympic gold medal into a rout on Thursday. We're just not sure what it was.

The NBC swimming analyst's voice turned into a high-pitched shout that became lost in the roar of the crowd. There's nothing wrong with an announcer reflecting an event's excitement, but not to the point of losing control. Better to take a breath.

Only hours earlier, the knowledgeable Gaines showed what he had to offer. In the relative calm of an 800-meter freestyle preliminary race in the afternoon, Gaines neatly broke down gold medalist Katie Ledecky's swimming style in illuminating fashion, explaining to non-experts what put her ahead of her rivals.

Swimming analyst Michele Tafoya was impressive in leading Simone Manuel into speaking with emotion and a sense of history after becoming the first African-American woman to win a gold medal in swimming.

The best part of NBC's swimming coverage — no, not the silly count-up clock marking the minutes between Phelps' race time — was the decision to televise the ceremony after Phelps won the 200-meter individual medley for the fourth consecutive Olympics. His eyes glistening, Phelps struggled to control his emotions as the national anthem played.

FIJI GOLD: It was a joy to watch the Pacific Island nation of Fiji win its first Olympic medal, striking gold by routing Britain in the rugby sevens final, and a great example of the benefits to searching beyond NBC's prime-time coverage to see all that is being offered. "It's hard to put into words how big icons these players will be," NBC announcer Bill Seward said. "Being gold medalists, they will be heroes in their country forevermore."

The win produced an outpouring of celebrations in the stands and by players after the match. The sport is huge in Fiji, and the nation's prime minister traveled to Brazil for the games.

DVR ALERT: Let's hope mom and dad pressed the "record" button for any young aspiring gymnasts who wanted to see Biles' win. After starting its broadcast showing half of the competition, it was a long wait until the second half.

RATINGS: NBC reached 26.4 million people with its Wednesday prime-time telecast, dominated by swimming and beach volleyball. Add in streaming and the 1.9 million people who watched the U.S.-Australia basketball game on NBCSN, and there was a total of 28.6 million consuming Olympic content. During the corresponding night in London, NBC had 30.8 million viewers.

FORE: NBC has clearly not been happy with the golfers who chose to stay away from Rio de Janeiro, making the Olympics' first golf competition a little less star-studded than expected. Jordan Spieth, Jason Day, Rory McIlroy and Dustin Johnson cited concerns about the Zika virus; some critics have suggested concerns about a lack of prize money were in the mix, too. NBC host Mike Tirico said Thursday they were missing the chance to increase their sport's popularity worldwide. "I'm a believer that golf needs the Olympics more than the Olympics need golf," he said.