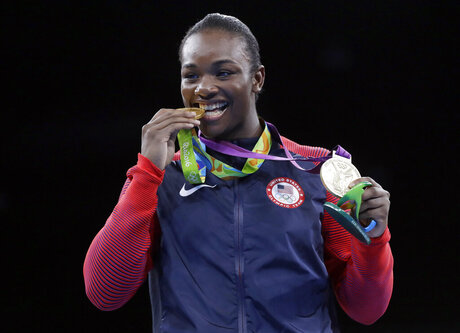 By: TIM DAHLBERG (AP)
LAS VEGASCopyright 2020 The Associated Press. All rights reserved. This material may not be published, broadcast, rewritten or redistributed.
36.175-115.137

LAS VEGAS (AP) — She became the first American woman boxer to win a gold medal in the London Olympics, then did it again a few months ago in Rio.

The brash middleweight from Flint, Michigan, makes her pro debut Saturday night on the undercard of the Andre Ward-Sergey Kovalev light heavyweight title clash. She'll do it without headgear but with the same two-minute rounds as in the amateurs.

And she will do it against a familiar opponent in Baltimore boxer Franchon Crews, a top amateur she beat on her way to earning a spot on the 2012 Olympic team.

"Very seldom do you see someone making their pro debut with this level of fight," said Mark Taffet, who is Shields' co-manager. "The idea is to use the first year and make it impactful in a way that hasn't been done for a female fighter."

There's no shortage of big plans for Shields, and seemingly no lack of confidence that the 21-year-old can succeed where other women boxers haven't. But there's also no guarantee Shields can be a breakout fighter who can bring the kind of interest to the fractured world of women's boxing that Ronda Rousey has to the UFC.

It may be a longshot, but that's not stopping Shields from envisioning women's boxing having a different future. She believes she can someday headline pay-per-view cards of her own like Ward-Kovalev at the glittering new T-Mobile Arena on the Las Vegas Strip.

"I consider myself a pay-per-view attraction now," Shields said. "The more you see me box, the more you'll like me. I want to fight 12 rounds. If a girl could withstand me for 12 rounds, that would be a good fight."

Shields will make her debut in a four-rounder that won't be on the pay-per-view portion of the card. Taffet said her bout, expected to take place with few people in the arena, will be streamed online and put on specialty channels in an effort to get people to buy the Kovalev-Ward card.

Crews also will make her pro debut in the fight. She is an eight-time USA Boxing national champion and a silver medalist at the 2012 world championships.

Shields, whose story of rising out of poverty with her fists was the subject of a documentary film after her first gold medal win, said she wants to fight 10 times in the next year to build her resume and get more people interested in her.

"I believe 150 percent in my boxing ability," she said. "I know I'm a great fighter. I fight better than 90 percent of the men who box now. I just know that, and I'm not at my best yet."

Shields was miffed after winning her gold medal in London that she didn't receive the kind of endorsements and attention given gymnast Gabby Douglas. Things were a bit better in Rio, where she became the first American boxer to defend an Olympic title and won the Val Barker Trophy as the tournament's top overall fighter.

Instead of continuing to draw a $5,000 monthly stipend from USA Boxing to go for a third gold in Tokyo four years from now, though, she decided to turn pro. Despite women's boxing receiving little attention in recent years and her bout not on pay-per-view, Shields isn't deterred.

Taffet, who used to be head of pay-per-view for HBO, said he signed on to help manage her because he is a big believer.

"She's going to make her mark not just on women's boxing, but all of boxing like the way we've seen recently in MMA," he said. "It's a new world, and there's a new sheriff in town."