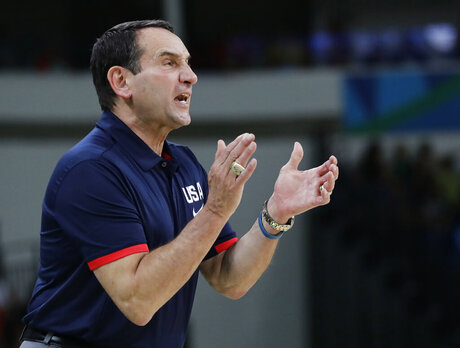 By: BRIAN MAHONEY (AP)
RIO DE JANEIROCopyright 2020 The Associated Press. All rights reserved. This material may not be published, broadcast, rewritten or redistributed.
-22.9028-43.2075

RIO DE JANEIRO (AP) — Mike Krzyzewski is heading out, Gregg Popovich is coming in and maybe LeBron James would even come back.

It's a time of transition for both the U.S. Olympic team and international basketball and it starts, as usual, with the Americans on top.

The U.S. won its third straight gold medal Sunday, beating Serbia 96-66 in the final game for Krzyzewski, who led the program for a decade and became the first coach to win three Olympic gold medals. He also guided the Americans to a pair of world championships, an 88-1 record and from the bottom back to the top.

"It's been a joy," Krzyzewski said. "I've been so lucky to have been given this opportunity."

Now it goes to Popovich, the other coach Jerry Colangelo considered before choosing Krzyzewski after taking control of USA Basketball in 2005. Like Krzyzewski, a graduate of the U.S. Military Academy, Popovich is a military man who attended the Air Force Academy and has built one of sports' most successful organizations while winning five championships with the San Antonio Spurs.

Krzyzewski has used the military as an inspiration for USA Basketball, referring to playing for the team as service and sacrifice, and Popovich should be an ideal choice to continue that relationship.

"You have the best guy in the world who's going to coach the team now and that says a lot for the program that's been developed," Krzyzewski said.

It was in perhaps its worst shape ever when he took over, coming off a bronze-medal finish in the 2004 Olympics and an even poorer finish two years earlier in the world basketball championship.

The Americans lost their first tournament under Krzyzewski, the 2006 worlds, but haven't dropped even a game since.

Some things to watch as they try to stay on stop:

James passed on a fourth Olympics after leading Cleveland to the NBA championship, but may not be done wearing the red, white and blue. The U.S. career leader in scoring before Carmelo Anthony and Kevin Durant passed him during this tournament, James said during an interview with ESPN that he hasn't retired from international play and was leaving the door open for the 2020 Olympics in Tokyo.

Besides James, players such as NBA MVP Stephen Curry and All-Stars and former Olympians Russell Westbrook, James Harden and Chris Paul all withdrew from consideration for the Rio roster. Perhaps some or all of them would be interested in playing for the respected Popovich, who could perhaps even persuade his own star with the Spurs, Kawhi Leonard, to play after also pulling out.

Before Popovich coaches James or any other NBA stars, the Americans will likely call upon the minor leaguers to get them there.

FIBA, basketball's world governing body, is introducing a new qualification system similar to the one in soccer, where teams will play home and road games against regional opponents to qualify for the 2019 Basketball World Cup in China. That tournament will then serve to qualify teams for Tokyo.

The Americans don't know yet who their opponents will be but do know that some games will take place during the NBA season, ruling out Popovich and the world's best players. They are likely to use NBA Development League players to carry them through until the A-team is available.

WHO ARE THE CHALLENGERS?

Serbia, Australia, Canada and others could soon be nipping at the Americans' sneakers.

With a second straight finals appearance in a major international tournament, the Serbs have established themselves as a rising global power. They had one of the youngest teams in the field — forward Nikola Jokic of the Denver Nuggets is 21 — and gave the U.S. a major fright in pool play before losing by three points.

The Aussies sent their best team to Rio, but were still without Ben Simmons, the No. 1 overall pick in this year's draft, and Dante Exum, still recovering from a knee injury. Australia was in line for its first medal before falling by one to Spain in the bronze-medal game. It seems to only be a matter of time before the Aussies hop onto the podium.

Canada may have been the best team not in Brazil after failing to qualify. Missing Minnesota star Andrew Wiggins and a few others, the Canadians fell short in 2016 but with talent like Tristan Thompson and Tyler Ennis, they have their sights set on Tokyo.