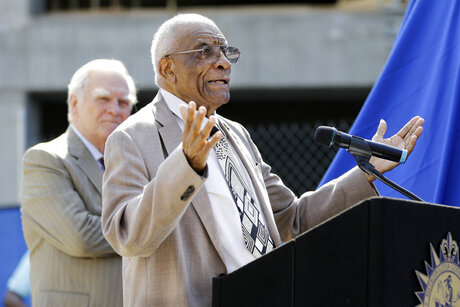 NASHVILLE, Tenn.Copyright 2020 The Associated Press. All rights reserved. This material may not be published, broadcast, rewritten or redistributed.
36.1659-86.7844

Temple's daughter, Edwina, told Tennessee State officials that her father died after an illness. He celebrated his birthday Tuesday.

"Words cannot in any fashion or manner express how deeply saddened we are over the loss of our beloved Ed Temple," Tennessee State University President Glenda Glover said in a statement. "The TSU family has truly lost a precious gem and contributor to the history and legacy that is TSU. Most importantly, our hearts go out to his family."

One of the athletes he coached at TSU, Wilma Rudolph, became the first American woman to win three gold medals at a single Olympics, in Rome in 1960. She won the 100 and 200 meters and teamed with Martha Hudson, Lucinda Williams and Barbara Jones to win the 400 relay.

Temple, whose other gold medalists from TSU included Edith McGuire and Wyomia Tyus, was inducted into nine halls of fame, including the Olympic Hall of Fame in 2012, where he was one of only four coaches to be inducted. He also served as a member of the U.S. Olympic Committee, the international Women's Track and Field Committee and the Nashville Sports Council.

Temple coached the first U.S. women's teams to compete in the Soviet Union in 1958 and in China in 1975. But he was best known for leading the athletes at TSU, known as the Tigerbelles, during his 41 years as the university's women's track coach.

He coached his teams to more than 30 national titles and led 40 athletes to the Olympics.

For many of the women on his teams, Temple was more than a coach.

"I always looked at Coach Temple as a father figure and a man of truth and wisdom," said TSU Olympian Chandra Cheeseborough-Guice, a former Tigerbelle who succeeded Temple as track and field coach. "He really brought out the best in me. He made me realize my potential that had not been tapped."

Former Tigerbelle Edith McGuire Duvall said Temple was there for her after she lost her father.

"This man treated us all like his kids," Duvall said. "He impressed upon me to finish school. We were there to run track, but also to get an education and to be ladies."

Temple began his career during a time when black female athletes were treated as second-class citizens, even by their male counterparts.

Still, Temple's team brought home the gold and silver in the 100 meters, gold in the 200 and a medal performance in the 400 relay.

"Those were the kind of things we had to battle," he said in June 1993 after retiring from coaching. "It was unnecessary types of things. We, the women, were USA citizens representing the United States. Why did we have to go through all that kind of stuff? It just didn't make sense."

In a 2007 interview with The Tennessean, Temple said Rudolph was the best female track and field athlete he'd ever seen.

"She had it all," he said. "She had the charisma, she had the athletic ability, she had everything. When I look back, she opened up the door for women's sports, period. I'm not just talking about track and field."

Temple said Rudolph took a nap just before winning the 1960 gold medal in the 100.

"I was out there all nervous, walking around the infield," he recalled. "And Wilma was on the rub-down table, and she had fallen asleep. Fell asleep!"

Rudolph, who suffered from polio as a child, died of brain cancer in 1994.

Temple was born in Harrisburg, Pennsylvania, and attended Tennessee A&I, where he received bachelor's and master's degrees.

The track at TSU is named for Temple. So is Ed Temple Boulevard in Nashville, adjacent to the TSU campus. Seminars on sports and society, held each year on TSU's campus, are named in his honor, and in 2015, a 9-foot bronze statue was unveiled in Temple's likeness at First Tennessee Park in Nashville.

"Even the Bible says a prophet is seldom honored in his hometown," U.S. Congressman Jim Cooper said at the statue's unveiling. "But here we are honoring perhaps one of the greatest coaches in all of history."

Temple took great pride in the success of his athletes, both on and off the field.

"They are an inspiration to everybody," he said late in life. "It just shows what can be done. Where there's a will, there's a way."