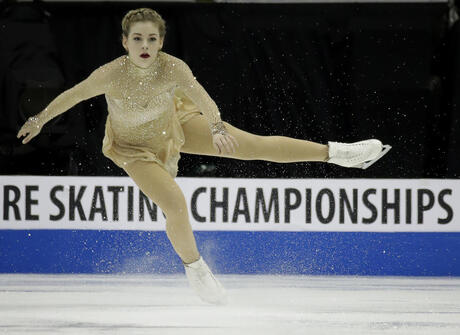 By: BARRY WILNER (AP)
NEW YORKCopyright 2020 The Associated Press. All rights reserved. This material may not be published, broadcast, rewritten or redistributed.
40.7143-74.006

That's probably a wise decision considering her struggles at the U.S. championships and her split with renowned coach Frank Carroll.

This isn't the best year to be taking backward steps in figure skating, what with the Olympics in South Korea 12 months away. Putting out your best, particularly for international judges, can be a key for Olympic success. Next month's world championship is the final one before the Pyeongchang Games, and Gold won't be there.

Instead, she'll be settling in with new coaches Marina Zoueva and Oleg Epstein in Canton, Michigan, at a facility where Canadian star and three-time world champion Patrick Chan trains. Carroll, who guided Evan Lysacek to 2010 Olympic gold and also worked for years with Michelle Kwan, announced at nationals last month that he was no longer going to work with Gold.

"I will be taking coaching with Marina and Oleg," Gold said this week while appearing at a U.S. Olympic Committee function in New York. "I've taken two or three training days with them just to make sure that is what I wanted and it definitely is. I love the environment there, skating with Patrick and (American dance champions Maia and Alex Shibutani). It is a really great group.

"Everyone I have talked to about it there has really supported my decision and they think it is a positive environment. It is really the head space and the positive energy I need to be around."

Everything sure seemed positive for Gold in 2014, when she won the first of her two U.S. titles, then helped the Americans finish third in the Sochi Olympics team event. She came in fourth in the women's individual competition.

But since leading after the short program at last year's worlds, then falling to fourth, Gold has been on a downward spiral that hit its low point when she finished sixth in Kansas City in January.

"Nationals wasn't what I wanted," the 21-year-old Gold said. "Yes, I was surprised that I wasn't able to come back in the long program, which is usually where I am really, really strong. Sometimes people have bad days, have off times. That was a time where I just wasn't able to make the comeback I wanted.

"I am done for the season, just waiting, a clean slate."

She will perform this spring with Stars on Ice before diving into next season, where Gold will need some stellar showings in the Grand Prix series before January's nationals that serve as the Olympic trials.

Gold was, well, the golden girl of U.S. skating after her performances in Sochi. Her grace and beauty, enhanced by programs that fit her style well, made her a threat to the Russians and Japanese standouts on the international scene.

Now she needs a new start and is playing catch-up to veteran Ashley Wagner and rising star Karen Chen, the 2017 U.S. champion.

But Gold is a determined athlete, and even with such a short period between the coaching change and Pyeongchang, she's confident she can challenge for a spot on the U.S. squad.

"I feel really positive about the changes I am making," she said. "I think I needed to change things, the environment, just a change of pace with a new group that is really positive and supportive, and I'm looking forward to starting fresh with a new season.

"The Olympics are really incredible, I am doing everything I can to make the team."

There's a chance Gold could be a double bronze medalist by the time the next Olympics come around. Sochi gold winner Adelina Sotnikova has been mentioned as one of the athletes being investigated in the doping scandal surrounding Russian sports.

"It is a very controversial situation," Gold said. "I am trying not to think about it too much because it was so long ago, and it was that Olympics and I am really looking forward toward 2018. I choose to compete clean myself, and if that is what she chose to do, it is not my decision whether she is stripped or not. I guess we will see what their decision is."