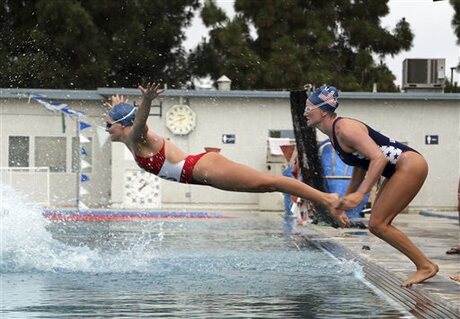 By: JAY COHEN (AP)
LOS ALAMITOS, Calif.Copyright 2020 The Associated Press. All rights reserved. This material may not be published, broadcast, rewritten or redistributed.
33.8031-118.073

LOS ALAMITOS, Calif. (AP) — Under a cloudy, gray sky, the players line up along the pool, waiting for their cue from Sami Hill. Then, one by one, they belly-flop into the water, with some showing more impressive form than a few timid teammates.

The U.S. women's water polo team is prepping for the Rio Olympics this summer, and part of its regular routine is Friday flops into the water before the start of the practice. What was once just another way for the players to bond with each other has turned into a connection with prep players across the country through the use of social media.

Team Australia, which is training in Southern California ahead of its exhibition against the U.S. on Sunday, even got into the act on Friday, belly-flopping into the pool before the start of its practice.

The idea grew out of a conversation between players looking for alliterations for each day, according to Hill. Melissa Seidemann, a defender who helped the U.S. win its first Olympic gold in 2012, had been belly-flopping into the pool on occasion, so the players decided to make it a group activity on Fridays.

Since then, they have mixed in a few themes here and there. They did a "Running Man Challenge" on May 6, for the dance trending on social media. They held one "Flop Friday" in regular clothes.

"I feel like we try to make it more creative each week," Hill said. "You really can do a lot with it."

Coach Adam Krikorian said he teases the players about the flops occasionally, but he knows it serves an important purpose.

"The very fabric that makes this whole thing, this whole experience great is the fact that you can do it with a group of people that you love and that you enjoy being around," he said. "It's so important for us to remember that through this process and to enjoy the fun aspects of this process."

Hill posts "Flop Friday" videos to her Twitter account. She said she thought it would attract some attention on social media, and she was right.

Players from all over the U.S. have posted their own "Flop Friday" videos, often mimicking the theme from the national team, but sometimes offering their own show. Claire Alfano, 15, of Corona del Mar, California, who goes to a boarding school in Pennsylvania, joined her club team for its own "Running Man Challenge" version.

"I saw the video of the national team, they posted it on the USA Water Polo Instagram," Alfano said in a phone interview. "Once my team saw that video they just thought that it would be cool if we could recreate it."

Alfano said she thinks it's a fun way for the national team to connect with younger players.

"It was really cool because Sami Hill actually retweeted it," she said of her team's video.

The outreach is important for the U.S. players and Krikorian, who took over the national program in 2009. A healthy pipeline of talent is crucial to the success of the U.S. team, and everyone involved wants to help grow the sport, even if it means a bit of stinging pain on Fridays.

"It's just something everyone can do. You only need yourself, you need to flop and commit," a grinning Hill said.