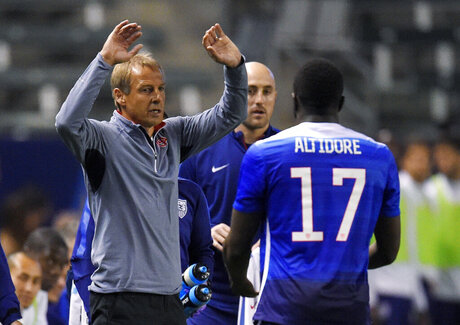 By: DAN GREENSPAN (AP)
CARSON, Calif.Copyright 2020 The Associated Press. All rights reserved. This material may not be published, broadcast, rewritten or redistributed.
33.8314-118.282

CARSON, Calif. (AP) — Jordan Morris made his ninth appearance for the United States last Friday, which gave him nine more games for the national team than as a professional.

At least the Seattle Sounders' newest prospect is now eligible for the payments due national team players: His first seven appearances came during his college career at Stanford.

"This will be the first time he gets a bonus," forward Jozy Altidore said. "We're all happy for him because he was ineligible with the NCAA rules."

The financial incentive was a pleasant extra benefit for Morris during the U.S. team's annual January camp in Southern California, but coach Jurgen Klinsmann used the camp to prepare two age levels of American soccer for critical matches on March 25 and 29.

The under-23 team faces Colombia in a two-leg playoff for the final spot in the 2016 Olympics, while the senior team has two games against Guatemala in the semifinal round of regional qualifying for the 2018 World Cup.

Klinsmann invited nine under-23 players, including Morris, to the StubHub Center with an eye on reaching the tournament in Rio de Janeiro after missing out on the 2012 London Games. The German has long stressed the need for high-level competitive games to advance the program's overall development.

"This has been very good preparation for the matches coming up," said Jerome Kiesewetter, a German-born forward with an American father. "It's a good chance to work on our timing and also our teamwork. It's very important to qualify for the Olympics, and we want the best shot that we can get."

With the senior men focused on this summer's Centennial Copa America and World Cup qualifying before the 2018 tournament in Russia, the Olympics provide an invaluable chance for the younger American players to compete together in meaningful games over the next two years.

With that in mind, Klinsmann gave the youngsters a chance to develop chemistry and work alongside established names from Major League Soccer, including Altidore, Michael Bradley and Gyasi Zardes.

"Hopefully the benefit comes at the end of March," Klinsmann said. "Everyone that is eligible there for the Olympic team takes this as a head start, got four weeks under his belt. They all worked really well. The whole spirit of the camp was great."

Kellyn Acosta, a 20-year old defender, made his first two appearances against Iceland and Canada. Morris' Stanford teammate, Brandon Vincent, came on at the start of the second half against Les Rouges in his international debut.

"There was no one of this group that was behind in any way," Klinsmann said.

Morris, who caught Klinsmann's attention when the national team trained at Stanford ahead of the 2014 World Cup, showed ample promise playing alongside Altidore. In his last game before reporting to training camp in Seattle, Morris had several scoring chances in the 1-0 win over Canada.

In the 38th minute, Morris tried to place a high-arching shot over Maxime Crepeau when the goalkeeper came off his line while also giving Zardes a chance to play it. The ball sailed wide of the net and was a step too far for Zardes to reach.

"Every time you miss a chance like that you want it back," Morris said. "I'll be even more comfortable out here once I start playing in those professional games."

But Altidore sees Morris as a potential cornerstone player for the U.S. "that does everything" and is "capable of doing anything.

"He is raw, he's young, but anybody can see the starting points are really positive," Altidore said. "Hopefully he is a guy that can give us a lot in the future because he is getting more and more chances and he looks more and more ready every time he plays."