Home » Arts and entertainment » Some natural excitement at the swimming venue 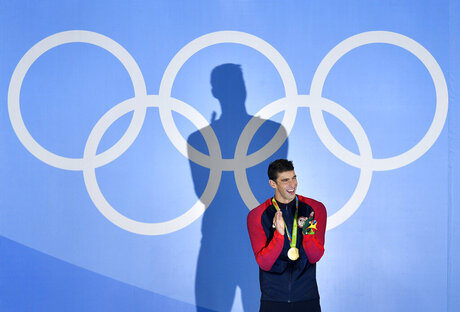 Uh oh. When NBC ran a split screen picture of an inert Phelps in the waiting area while introducing the women competing in the 200-meter freestyle race, the fear was that the network was firing up the hype again. The attention to Phelps and his South African rival before a semifinal race the previous night — look, the oddball is shadow-boxing in the waiting area! — was soap operatic.

Yet Katie Ledecky won gold in that freestyle race, and thanks to the Olympic schedule-makers, Phelps' butterfly competition followed so quickly there was no time to go overboard. Instead, superb camera work captured natural drama: Le Clos stealing looks at his obsession in the pool, Phelps waving his index finger and motioning the crowd to cheer after he won his 20th gold medal.

Between Phelps, Ledecky and Hungary's Katinka Hosszu, the pool provided some of the most electric moments of the Olympics so far.

It made up for gymnastics. Usually one of NBC's showcase events, the women's gymnastics team competition was drained of all suspense by the excellence of the U.S. gold medal quintet.

SEXISM ALERT: People are watching NBC closely for signs of sexism after the excessive attention paid to Hosszu's husband. So when Liam McHugh narrated a clip showing a goal by 18-year-old U.S. soccer player Mallory Pugh by saying, "just about three months ago she was planning for her prom," he should have asked himself: Would he make the same reference if it were an 18-year-old male player?

DO-OVER: NBC's cameras found gymnast Simone Biles' adoptive parents quickly on Tuesday, and Al Trautwig identified them as her parents. So did a caption on the screen. Simple enough, but two days earlier, Trautwig angered the adoption community by tweeting they were not her parents. Driving the point home, analyst Nastia Liukin said that "mom and dad (are) excited for their daughter."

ALERTS: If fans want to stay in the dark about the results of competitions like gymnastics before they are shown by NBC on tape delay, it's harder now than ever because of the proliferation of text alerts and emails sent by news organizations. CNN kept that in mind by staying circumspect. The subject line in its email alert didn't give the results, people had to open the email.

SOUR FACE: Internet memes widely spread pictures of Phelps' sour face as Le Clos shadow-boxed near him. "I had a similar expression when I encountered a moth in my house," NBC soccer announcer Arlo White said.

RATINGS: NBC said its Olympic audience reached parity with the London Games for the first time on the third night of competition — with an asterisk. The network said its "total audience delivery" was 31.5 million for the Olympics on Monday evening, compared to 31.6 million who watched the same night in London in 2012. The "total audience delivery" figure is a statistic NBC hurriedly invented when it saw sharp declines in its traditional ratings for the first couple of nights of the Rio de Janeiro Games. It adds viewership for prime-time telecasts on cable's NBCSN and Bravo, along with streaming, to the 28.9 million who watched NBC's telecast. NBC says the comparison is valid because even though the cable viewers weren't watching the same thing as people tuned in to NBC, they were still watching the Olympics. There's no comparable number from 2012, because the company didn't allow its cable affiliates and website to compete with the prime-time NBC telecast four years ago.

Who cares? Advertisers, and NBC hopes the new statistic convinces them more people are watching than the traditional Nielsen numbers say.