Home » Germany » Neid and Sundhage are longtime contemporaries and foes 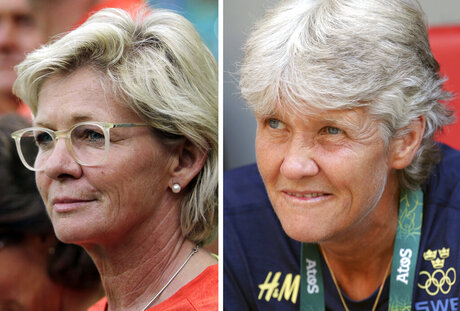 By: ANNE M. PETERSON (AP)
RIO DE JANEIROCopyright 2020 The Associated Press. All rights reserved. This material may not be published, broadcast, rewritten or redistributed.
-22.9028-43.2075

RIO DE JANEIRO (AP) — Back when the first women's Olympic soccer tournament was held in 1996 at the Atlanta Games, they were players: Silvia Neid played for Germany and Pia Sundhage for Sweden.

Twenty years later, they are coaches for their native countries, facing off in the gold-medal match at the Rio Olympics. Bound together by long careers in soccer, they'll momentarily put aside their friendly camaraderie Friday at Maracana Stadium.

It will be Neid's last match as coach of the German team. After the Olympics she's stepping down to take on a scouting role.

The two met in the hallway at Maracana on Thursday before meeting with reporters. Neid said Sundhage asked what she was planning to do with her time, perhaps play golf?

"No, no, no," Neid said she replied. "I'm going to keep on watching women's football and see how I can get any trends about the way that you play."

The two faced off last at the Women's World Cup in Canada last summer, with Germany coming out on top 4-1 in the opening match of the knockout round. Sweden defeated Germany in a friendly in early 2015, but otherwise Germany has dominated the meetings with eight straight victories in major competitive tournaments.

"I remember we played in '95 against each other and Sweden won, in Sweden. That's a neat memory," Sundhage said. "And she's been in football forever, same as me. ... She's been very, very successful. It will be great to play her again and hopefully — compared to the other results against German lately — hopefully we'll get a result and Sweden will score one more goal than Germany."

Neid played in 111 games for the German national team from 1982-96, scoring 48 goals. During her playing career, Germany won three UEFA championships and was runner up at the 1995 World Cup. Her last match as a player was at the Atlanta Games, against Brazil.

She went on to be an assistant on German's team that won the 2003 World Cup, then took over as coach of the senior women in 2005, leading the team to another World Cup title in 2007. She was named FIFA Women's Coach of the Year for 2010.

"She's the kind of coach who can really improve players," said former German goalkeeper Nadine Angerer. "She's incredible as a coach. She sees weaknesses and she has solutions to make every single player better."

Sundhage has had an equally illustrious career. She scored 71 goals in 146 appearances with Sweden's national team from 1975-96.

Sundhage won gold medals as a coach of the U.S. national team at both the Beijing and London Games. She led the Americans to the final match of the 2011 World Cup, but the team fell on penalties to Japan. She returned home to coach Sweden in 2013.

Both teams have had a very different run through Brazil. Sweden defeated the favored Americans in the quarterfinals. The Swedes "parked the bus" in defense against the three-time defending Olympic champions, surviving 4-3 on a penalty shootout following a 1-1 draw in Brasilia.

U.S. goalkeeper Hope Solo stirred controversy after the match when she called Sweden a "bunch of cowards" for employing the tactic. But it clearly worked, so Sweden took much the same approach in the semifinals against Brazil, again advancing 4-3 on penalties following a scoreless draw against the hosts.

Germany, ranked No. 2 in the world, avenged a loss to Canada earlier in the games, sending the Canadians to the bronze-medal match with a 2-0 victory.

Both teams are playing in their first Olympic final. It is also the first all-European final since women's soccer became an Olympic sport in 1996.

Germany has won the bronze medal three times, in Sydney, Athens and Beijing. Sweden has never been on the podium.

The two teams have met three total times at the Olympics, and the Germans have won all three — the most recent was a 2-0 victory in extra time in the quarterfinals at the 2008 Beijing Games.

The Germans famously defeated Sweden 2-1 on a golden goal in the 98th minute to win the 2003 Women's World Cup, which was held in the United States because of the SARS outbreak in China.

Sundhage, known for breaking into song at news conferences, was asked if she had a tune for the moment. She sounded a hopeful note for Sweden, singing "The times they are a-changing."

Neid laughed at a similar question: "I can't sing. But I can dance. I need Pia to do the music."